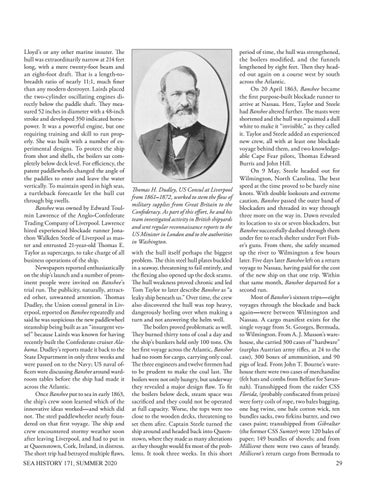 Lloyd’s or any other marine insurer. The hull was extraordinarily narrow at 214 feet long, with a mere twenty-foot beam and an eight-foot draft. That is a length-tobreadth ratio of nearly 11:1, much finer than any modern destroyer. Lairds placed the two-cylinder oscillating engines directly below the paddle shaft. They measured 52 inches in diameter with a 48-inch stroke and developed 350 indicated horsepower. It was a powerful engine, but one requiring training and skill to run properly. She was built with a number of experimental designs. To protect the ship from shot and shells, the boilers sat completely below deck level. For efficiency, the patent paddlewheels changed the angle of the paddles to enter and leave the water vertically. To maintain speed in high seas, a turtleback forecastle let the hull cut through big swells. Banshee was owned by Edward Toulmin Lawrence of the Anglo-Confederate Trading Company of Liverpool. Lawrence hired experienced blockade runner Jonathon Walkden Steele of Liverpool as master and entrusted 21-year-old Thomas E. Taylor as supercargo, to take charge of all business operations of the ship. Newspapers reported enthusiastically on the ship’s launch and a number of prominent people were invited on Banshee’s trial run. The publicity, naturally, attracted other, unwanted attention. Thomas Dudley, the Union consul general in Liverpool, reported on Banshee repeatedly and said he was suspicious the new paddlewheel steamship being built as an “insurgent vessel” because Lairds was known for having recently built the Confederate cruiser Alabama. Dudley’s reports made it back to the State Department in only three weeks and were passed on to the Navy; US naval officers were discussing Banshee around wardroom tables before the ship had made it across the Atlantic. Once Banshee put to sea in early 1863, the ship’s crew soon learned which of the innovative ideas worked—and which did not. The steel paddlewheeler nearly foundered on that first voyage. The ship and crew encountered stormy weather soon after leaving Liverpool, and had to put in at Queenstown, Cork, Ireland, in distress. The short trip had betrayed multiple flaws,

Thomas H. Dudley, US Consul at Liverpool from 1861–1872, worked to stem the flow of military supplies from Great Britain to the Confederacy. As part of this effort, he and his team investigated activity in British shipyards and sentdownloaded regular reports to UTC the This content fromreconnaissance 76.24.124.197 on Thu, 23 Apr 2020 18:48:14 All use subject to https://about.jstor.org/terms US Minister in London and to the authorities in Washington. with the hull itself perhaps the biggest problem. The thin steel hull plates buckled in a seaway, threatening to fail entirely, and the flexing also opened up the deck seams. The hull weakness proved chronic and led Tom Taylor to later describe Banshee as “a leaky ship beneath us.” Over time, the crew also discovered the hull was top heavy, dangerously heeling over when making a turn and not answering the helm well. The boilers proved problematic as well. They burned thirty tons of coal a day and the ship’s bunkers held only 100 tons. On her first voyage across the Atlantic, Banshee had no room for cargo, carrying only coal. The three engineers and twelve firemen had to be prudent to make the coal last. The boilers were not only hungry, but underway they revealed a major design flaw. To fit the boilers below deck, steam space was sacrificed and they could not be operated at full capacity. Worse, the tops were too close to the wooden decks, threatening to set them afire. Captain Steele turned the ship around and headed back into Queenstown, where they made as many alterations as they thought would fix most of the problems. It took three weeks. In this short

period of time, the hull was strengthened, the boilers modified, and the funnels lengthened by eight feet. Then they headed out again on a course west by south across the Atlantic. On 20 April 1863, Banshee became the first purpose-built blockade runner to arrive at Nassau. Here, Taylor and Steele had Banshee altered further. The masts were shortened and the hull was repainted a dull white to make it “invisible,” as they called it. Taylor and Steele added an experienced new crew, all with at least one blockade voyage behind them, and two knowledgeable Cape Fear pilots, Thomas Edward Burris and John Hill. On 9 May, Steele headed out for Wilmington, North Carolina. The best speed at the time proved to be barely nine knots. With double lookouts and extreme caution, Banshee passed the outer band of blockaders and threaded its way through three more on the way in. Dawn revealed its location to six or seven blockaders, but Banshee successfully dashed through them under fire to reach shelter under Fort Fisher’s guns. From there, she safely steamed up the river to Wilmington a few hours later. Five days later Banshee left on a return voyage to Nassau, having paid for the cost of the new ship on that one trip. Within that same month, Banshee departed for a second run. Most of Banshee’s sixteen trips—eight voyages through the blockade and back again—were between Wilmington and Nassau. A cargo manifest exists for the single voyage from St. Georges, Bermuda, to Wilmington. From A. J. Musson’s warehouse, she carried 300 cases of “hardware” (surplus Austrian army rifles, at 24 to the case), 300 boxes of ammunition, and 90 pigs of lead. From John T. Bourne’s warehouse there were two cases of merchandise (felt hats and combs from Belfast for Savannah). Transshipped from the raider CSS Florida, (probably confiscated from prizes) were forty coils of rope, two bales bagging, one bag twine, one bale cotton wick, ten bundles sacks, two firkins butter, and two cases paint; transshipped from Gibraltar (the former CSS Sumter) were 120 bales of paper; 149 bundles of shovels; and from Millicent there were two cases of brandy. Millicent’s return cargo from Bermuda to