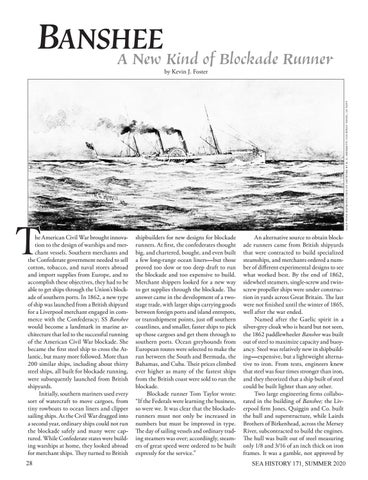 he American Civil War brought innovation to the design of warships and merchant vessels. Southern merchants and the Confederate government needed to sell cotton, tobacco, and naval stores abroad and import supplies from Europe, and to accomplish these objectives, they had to be able to get ships through the Union’s blockade of southern ports. In 1862, a new type of ship was launched from a British shipyard for a Liverpool merchant engaged in commerce with the Confederacy; SS Banshee would become a landmark in marine architecture that led to the successful running of the American Civil War blockade. She became the first steel ship to cross the Atlantic, but many more followed. More than 200 similar ships, including about thirty steel ships, all built for blockade running, were subsequently launched from British shipyards. Initially, southern mariners used every sort of watercraft to move cargoes, from tiny rowboats to ocean liners and clipper sailing ships. As the Civil War dragged into a second year, ordinary ships could not run the blockade safely and many were captured. While Confederate states were building warships at home, they looked abroad for merchant ships. They turned to British

shipbuilders for new designs for blockade runners. At first, the confederates thought big, and chartered, bought, and even built a few long-range ocean liners—but those proved too slow or too deep draft to run the blockade and too expensive to build. Merchant shippers looked for a new way to get supplies through the blockade. The answer came in the development of a twostage trade, with larger ships carrying goods between foreign ports and island entrepots, or transshipment points, just off southern coastlines, and smaller, faster ships to pick up those cargoes and get them through to southern ports. Ocean greyhounds from European routes were selected to make the run between the South and Bermuda, the Bahamas, and Cuba. Their prices climbed ever higher as many of the fastest ships from the British coast were sold to run the blockade. Blockade runner Tom Taylor wrote: “If the Federals were learning the business, so were we. It was clear that the blockaderunners must not only be increased in numbers but must be improved in type. The day of sailing vessels and ordinary trading steamers was over; accordingly, steamers of great speed were ordered to be built expressly for the service.”

An alternative source to obtain blockade runners came from British shipyards that were contracted to build specialized steamships, and merchants ordered a number of different experimental designs to see what worked best. By the end of 1862, sidewheel steamers, single-screw and twinscrew propeller ships were under construction in yards across Great Britain. The last were not finished until the winter of 1865, well after the war ended. Named after the Gaelic spirit in a silver-grey cloak who is heard but not seen, the 1862 paddlewheeler Banshee was built out of steel to maximize capacity and buoyancy. Steel was relatively new in shipbuilding—expensive, but a lightweight alternative to iron. From tests, engineers knew that steel was four times stronger than iron, and they theorized that a ship built of steel could be built lighter than any other. Two large engineering firms collaborated in the building of Banshee; the Liverpool firm Jones, Quiggin and Co. built the hull and superstructure, while Lairds Brothers of Birkenhead, across the Mersey River, subcontracted to build the engines. The hull was built out of steel measuring only 1/8 and 3/16 of an inch thick on iron frames. It was a gamble, not approved by SEA HISTORY 171, SUMMER 2020