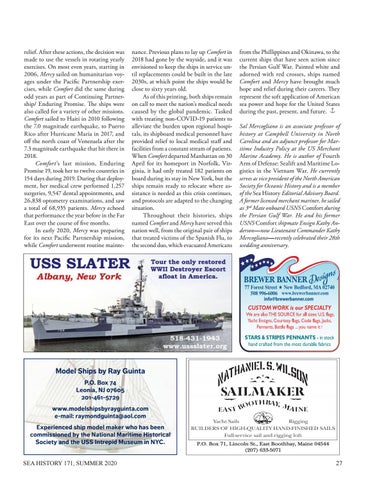 relief. After these actions, the decision was made to use the vessels in rotating yearly exercises. On most even years, starting in 2006, Mercy sailed on humanitarian voyages under the Pacific Partnership exercises, while Comfort did the same during odd years as part of Continuing Partnership/ Enduring Promise. The ships were also called for a variety of other missions. Comfort sailed to Haiti in 2010 following the 7.0 magnitude earthquake, to Puerto Rico after Hurricane Maria in 2017, and off the north coast of Venezuela after the 7.3 magnitude earthquake that hit there in 2018. Comfort’s last mission, Enduring Promise 19, took her to twelve countries in 154 days during 2019. During that deployment, her medical crew performed 1,257 surgeries, 9,547 dental appointments, and 26,838 optometry examinations, and saw a total of 68,935 patients. Mercy echoed that performance the year before in the Far East over the course of five months. In early 2020, Mercy was preparing for its next Pacific Partnership mission, while Comfort underwent routine mainte-

nance. Previous plans to lay up Comfort in 2018 had gone by the wayside, and it was envisioned to keep the ships in service until replacements could be built in the late 2030s, at which point the ships would be close to sixty years old. As of this printing, both ships remain on call to meet the nation’s medical needs caused by the global pandemic. Tasked with treating non-COVID-19 patients to alleviate the burden upon regional hospitals, its shipboard medical personnel have provided relief to local medical staff and facilities from a constant stream of patients. When Comfort departed Manhattan on 30 April for its homeport in Norfolk, Virginia, it had only treated 182 patients on board during its stay in New York, but the ships remain ready to relocate where assistance is needed as this crisis continues, and protocols are adapted to the changing situation. Throughout their histories, ships named Comfort and Mercy have served this nation well, from the original pair of ships that treated victims of the Spanish Flu, to the second duo, which evacuated Americans

from the Phillippines and Okinawa, to the current ships that have seen action since the Persian Gulf War. Painted white and adorned with red crosses, ships named Comfort and Mercy have brought much hope and relief during their careers. They represent the soft application of American sea power and hope for the United States during the past, present, and future. Sal Mercogliano is an associate professor of history at Campbell University in North Carolina and an adjunct professor for Maritime Industry Policy at the US Merchant Marine Academy. He is author of Fourth Arm of Defense: Sealift and Maritime Logistics in the Vietnam War. He currently serves as vice president of the North American Society for Oceanic History and is a member of the Sea History Editorial Advisory Board. A former licensed merchant mariner, he sailed as 3rd Mate onboard USNS Comfort during the Persian Gulf War. He and his former USNS Comfort shipmate Ensign Kathy Anderson—now Lieutenant Commander Kathy 1/8 pagecelebrated AD Mercogliano—recently their 28th wedding anniversary.