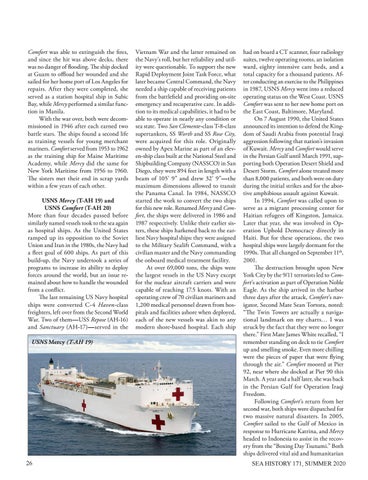 Comfort was able to extinguish the fires, and since the hit was above decks, there was no danger of flooding. The ship docked at Guam to offload her wounded and she sailed for her home port of Los Angeles for repairs. After they were completed, she served as a station hospital ship in Subic Bay, while Mercy performed a similar function in Manila. With the war over, both were decommissioned in 1946 after each earned two battle stars. The ships found a second life as training vessels for young merchant mariners. Comfort served from 1953 to 1962 as the training ship for Maine Maritime Academy, while Mercy did the same for New York Maritime from 1956 to 1960. The sisters met their end in scrap yards within a few years of each other. USNS Mercy (T-AH 19) and USNS Comfort (T-AH 20) More than four decades passed before similarly named vessels took to the sea again as hospital ships. As the United States ramped up its opposition to the Soviet Union and Iran in the 1980s, the Navy had a fleet goal of 600 ships. As part of this build-up, the Navy undertook a series of programs to increase its ability to deploy forces around the world, but an issue remained about how to handle the wounded from a conflict. The last remaining US Navy hospital ships were converted C-4 Haven-class freighters, left over from the Second World War. Two of them—USS Repose (AH-16) and Sanctuary (AH-17)—served in the USNS Mercy (T-AH 19)

Vietnam War and the latter remained on the Navy’s roll, but her reliability and utility were questionable. To support the new Rapid Deployment Joint Task Force, what later became Central Command, the Navy needed a ship capable of receiving patients from the battlefield and providing on-site emergency and recuperative care. In addition to its medical capabilities, it had to be able to operate in nearly any condition or sea state. Two San Clemente-class T-8-class supertankers, SS Worth and SS Rose City, were acquired for this role. Originally owned by Apex Marine as part of an eleven-ship class built at the National Steel and Shipbuilding Company (NASSCO) in San Diego, they were 894 feet in length with a beam of 105’ 9” and drew 32’ 9”—the maximum dimensions allowed to transit the Panama Canal. In 1984, NASSCO started the work to convert the two ships for this new role. Renamed Mercy and Comfort, the ships were delivered in 1986 and 1987 respectively. Unlike their earlier sisters, these ships harkened back to the earliest Navy hospital ships: they were assigned to the Military Sealift Command, with a civilian master and the Navy commanding the onboard medical treatment facility. At over 69,000 tons, the ships were the largest vessels in the US Navy except for the nuclear aircraft carriers and were capable of reaching 17.5 knots. With an operating crew of 70 civilian mariners and 1,200 medical personnel drawn from hospitals and facilities ashore when deployed, each of the new vessels was akin to any modern shore-based hospital. Each ship

had on board a CT scanner, four radiology suites, twelve operating rooms, an isolation ward, eighty intensive care beds, and a total capacity for a thousand patients. After conducting an exercise to the Philippines in 1987, USNS Mercy went into a reduced operating status on the West Coast. USNS Comfort was sent to her new home port on the East Coast, Baltimore, Maryland. On 7 August 1990, the United States announced its intention to defend the Kingdom of Saudi Arabia from potential Iraqi aggression following that nation’s invasion of Kuwait. Mercy and Comfort would serve in the Persian Gulf until March 1991, supporting both Operation Desert Shield and Desert Storm. Comfort alone treated more than 8,000 patients, and both were on duty during the initial strikes and for the abortive amphibious assault against Kuwait. In 1994, Comfort was called upon to serve as a migrant processing center for Haitian refugees off Kingston, Jamaica. Later that year, she was involved in Operation Uphold Democracy directly in Haiti. But for these operations, the two hospital ships were largely dormant for the 1990s. That all changed on September 11th, 2001. The destruction brought upon New York City by the 9/11 terrorists led to Comfort’s activation as part of Operation Noble Eagle. As the ship arrived in the harbor three days after the attack, Comfort’s navigator, Second Mate Sean Tortora, noted: “The Twin Towers are actually a navigational landmark on my charts… I was struck by the fact that they were no longer there.” First Mate James White recalled, “I remember standing on deck to tie Comfort up and smelling smoke. Even more chilling were the pieces of paper that were flying through the air.” Comfort moored at Pier 92, near where she docked at Pier 90 this March. A year and a half later, she was back in the Persian Gulf for Operation Iraqi Freedom. Following Comfort’s return from her second war, both ships were dispatched for two massive natural disasters. In 2005, Comfort sailed to the Gulf of Mexico in response to Hurricane Katrina, and Mercy headed to Indonesia to assist in the recovery from the “Boxing Day Tsunami.” Both ships delivered vital aid and humanitarian SEA HISTORY 171, SUMMER 2020