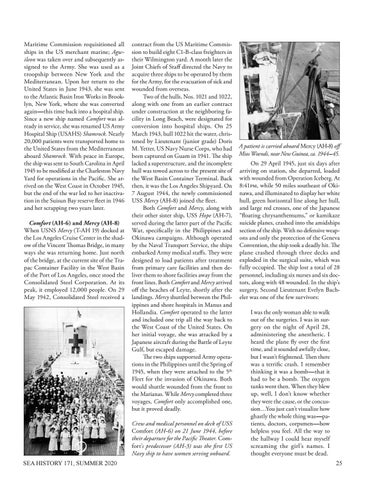 Maritime Commission requisitioned all ships in the US merchant marine; Agwileon was taken over and subsequently assigned to the Army. She was used as a troopship between New York and the Mediterranean. Upon her return to the United States in June 1943, she was sent to the Atlantic Basin Iron Works in Brooklyn, New York, where she was converted again—this time back into a hospital ship. Since a new ship named Comfort was already in service, she was renamed US Army Hospital Ship (USAHS) Shamrock. Nearly 20,000 patients were transported home to the United States from the Mediterranean aboard Shamrock. With peace in Europe, the ship was sent to South Carolina in April 1945 to be modified at the Charleston Navy Yard for operations in the Pacific. She arrived on the West Coast in October 1945, but the end of the war led to her inactivation in the Suisun Bay reserve fleet in 1946 and her scrapping two years later. Comfort (AH-6) and Mercy (AH-8) When USNS Mercy (T-AH 19) docked at the Los Angeles Cruise Center in the shadow of the Vincent Thomas Bridge, in many ways she was returning home. Just north of the bridge, at the current site of the Trapac Container Facility in the West Basin of the Port of Los Angeles, once stood the Consolidated Steel Corporation. At its peak, it employed 12,000 people. On 29 May 1942, Consolidated Steel received a

contract from the US Maritime Commission to build eight C1-B-class freighters in their Wilmington yard. A month later the Joint Chiefs of Staff directed the Navy to acquire three ships to be operated by them for the Army, for the evacuation of sick and wounded from overseas. Two of the hulls, Nos. 1021 and 1022, along with one from an earlier contract under construction at the neighboring facility in Long Beach, were designated for conversion into hospital ships. On 25 March 1943, hull 1022 hit the water, christened by Lieutenant (junior grade) Doris M. Yetter, US Navy Nurse Corps, who had been captured on Guam in 1941. The ship lacked a superstructure, and the incomplete hull was towed across to the present site of the West Basin Container Terminal. Back then, it was the Los Angeles Shipyard. On 7 August 1944, the newly commissioned USS Mercy (AH-8) joined the fleet. Both Comfort and Mercy, along with their other sister ship, USS Hope (AH-7), served during the latter part of the Pacific War, specifically in the Philippines and Okinawa campaigns. Although operated by the Naval Transport Service, the ships embarked Army medical staffs. They were designed to load patients after treatment from primary care facilities and then deliver them to shore facilities away from the front lines. Both Comfort and Mercy arrived off the beaches of Leyte, shortly after the landings. Mercy shuttled between the Philippines and shore hospitals in Manus and Hollandia. Comfort operated to the latter and included one trip all the way back to the West Coast of the United States. On her initial voyage, she was attacked by a Japanese aircraft during the Battle of Leyte Gulf, but escaped damage. The two ships supported Army operations in the Philippines until the Spring of 1945, when they were attached to the 5th Fleet for the invasion of Okinawa. Both would shuttle wounded from the front to the Marianas. While Mercy completed three voyages, Comfort only accomplished one, but it proved deadly. Crew and medical personnel on deck of USS Comfort (AH-6) on 21 June 1944, before their departure for the Pacific Theater. Comfort’s predecessor (AH-3) was the first US Navy ship to have women serving onboard.

A patient is carried aboard Mercy (AH-8) off Mios Woendi, near New Guinea, ca. 1944–45. On 29 April 1945, just six days after arriving on station, she departed, loaded with wounded from Operation Iceberg. At 8:41pm, while 50 miles southeast of Okinawa, and illuminated to display her white hull, green horizontal line along her hull, and large red crosses, one of the Japanese “floating chrysanthemums,” or kamikaze suicide planes, crashed into the amidships section of the ship. With no defensive weapons and only the protection of the Geneva Convention, the ship took a deadly hit. The plane crashed through three decks and exploded in the surgical suite, which was fully occupied. The ship lost a total of 28 personnel, including six nurses and six doctors, along with 48 wounded. In the ship’s surgery, Second Lieutenant Evelyn Bacheler was one of the few survivors: I was the only woman able to walk out of the surgeries. I was in surgery on the night of April 28, administering the anesthetic. I heard the plane fly over the first time, and it sounded awfully close, but I wasn’t frightened. Then there was a terrific crash. I remember thinking it was a bomb—that it had to be a bomb. The oxygen tanks went then. When they blew up, well, I don’t know whether they were the cause, or the concussion…You just can’t visualize how ghastly the whole thing was—patients, doctors, corpsmen—how helpless you feel. All the way to the hallway I could hear myself screaming the girl’s names. I thought everyone must be dead.