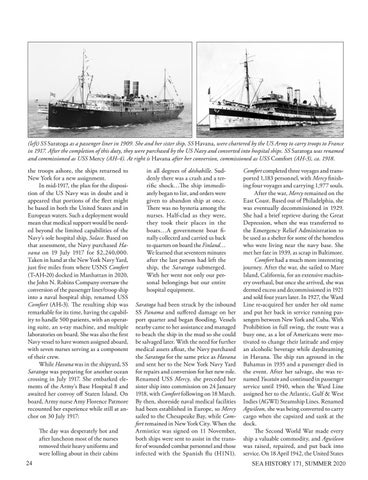 (left) SS Saratoga as a passenger liner in 1909. She and her sister ship, SS Havana, were chartered by the US Army to carry troops to France in 1917. After the completion of this duty, they were purchased by the US Navy and converted into hospital ships. SS Saratoga was renamed and commissioned as USS Mercy (AH-4). At right is Havana after her conversion, commissioned as USS Comfort (AH-3), ca. 1918. the troops ashore, the ships returned to New York for a new assignment. In mid-1917, the plan for the disposition of the US Navy was in doubt and it appeared that portions of the fleet might be based in both the United States and in European waters. Such a deployment would mean that medical support would be needed beyond the limited capabilities of the Navy’s sole hospital ship, Solace. Based on that assessment, the Navy purchased Havana on 19 July 1917 for $2,240,000. Taken in hand at the New York Navy Yard, just five miles from where USNS Comfort (T-AH-20) docked in Manhattan in 2020, the John N. Robins Company oversaw the conversion of the passenger liner/troop ship into a naval hospital ship, renamed USS Comfort (AH-3). The resulting ship was remarkable for its time, having the capability to handle 500 patients, with an operating suite, an x-ray machine, and multiple laboratories on board. She was also the first Navy vessel to have women assigned aboard, with seven nurses serving as a component of their crew. While Havana was in the shipyard, SS Saratoga was preparing for another ocean crossing in July 1917. She embarked elements of the Army’s Base Hospital 8 and awaited her convoy off Staten Island. On board, Army nurse Amy Florence Patmore recounted her experience while still at anchor on 30 July 1917: The day was desperately hot and after luncheon most of the nurses removed their heavy uniforms and were lolling about in their cabins 24

in all degrees of déshabille. Suddenly there was a crash and a terrific shock…The ship immediately began to list, and orders were given to abandon ship at once. There was no hysteria among the nurses. Half-clad as they were, they took their places in the boats…A government boat finally collected and carried us back to quarters on board the Finland… We learned that seventeen minutes after the last person had left the ship, the Saratoga submerged. With her went not only our personal belongings but our entire hospital equipment. Saratoga had been struck by the inbound SS Panama and suffered damage on her port quarter and began flooding. Vessels nearby came to her assistance and managed to beach the ship in the mud so she could be salvaged later. With the need for further medical assets afloat, the Navy purchased the Saratoga for the same price as Havana and sent her to the New York Navy Yard for repairs and conversion for her new role. Renamed USS Mercy, she preceded her sister ship into commission on 24 January 1918, with Comfort following on 18 March. By then, shoreside naval medical facilities had been established in Europe, so Mercy sailed to the Chesapeake Bay, while Comfort remained in New York City. When the Armistice was signed on 11 November, both ships were sent to assist in the transfer of wounded combat personnel and those infected with the Spanish flu (H1N1).

Comfort completed three voyages and transported 1,183 personnel, with Mercy finishing four voyages and carrying 1,977 souls. After the war, Mercy remained on the East Coast. Based out of Philadelphia, she was eventually decommissioned in 1929. She had a brief reprieve during the Great Depression, when she was transferred to the Emergency Relief Administration to be used as a shelter for some of the homeless who were living near the navy base. She met her fate in 1939, as scrap in Baltimore. Comfort had a much more interesting journey. After the war, she sailed to Mare Island, California, for an extensive machinery overhaul, but once she arrived, she was deemed excess and decommissioned in 1921 and sold four years later. In 1927, the Ward Line re-acquired her under her old name and put her back in service running passengers between New York and Cuba. With Prohibition in full swing, the route was a busy one, as a lot of Americans were motivated to change their latitude and enjoy an alcoholic beverage while daydreaming in Havana. The ship ran aground in the Bahamas in 1935 and a passenger died in the event. After her salvage, she was renamed Yucatán and continued in passenger service until 1940, when the Ward Line assigned her to the Atlantic, Gulf &amp; West Indies (AGWI) Steamship Lines. Renamed Agwileon, she was being converted to carry cargo when she capsized and sank at the dock. The Second World War made every ship a valuable commodity, and Agwileon was raised, repaired, and put back into service. On 18 April 1942, the United States SEA HISTORY 171, SUMMER 2020