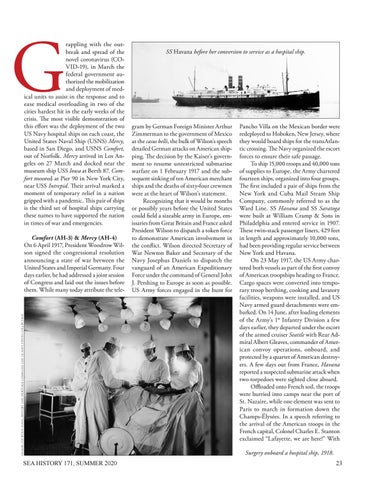 rappling with the outbreak and spread of the novel coronavirus (COVID-19), in March the federal government authorized the mobilization and deployment of medical units to assist in the response and to ease medical overloading in two of the cities hardest hit in the early weeks of the crisis. The most visible demonstration of this effort was the deployment of the two US Navy hospital ships on each coast, the United States Naval Ship (USNS) Mercy, based in San Diego, and USNS Comfort, out of Norfolk. Mercy arrived in Los Angeles on 27 March and docked near the museum ship USS Iowa at Berth 87. Comfort moored at Pier 90 in New York City, near USS Intrepid. Their arrival marked a moment of temporary relief in a nation gripped with a pandemic. This pair of ships is the third set of hospital ships carrying these names to have supported the nation in times of war and emergencies.

Comfort (AH-3) &amp; Mercy (AH-4) On 6 April 1917, President Woodrow Wilson signed the congressional resolution announcing a state of war between the United States and Imperial Germany. Four days earlier, he had addressed a joint session of Congress and laid out the issues before them. While many today attribute the tele-

SS Havana before her conversion to service as a hospital ship.

gram by German Foreign Minister Arthur Zimmerman to the government of Mexico as the casus belli, the bulk of Wilson’s speech detailed German attacks on American shipping. The decision by the Kaiser’s government to resume unrestricted submarine warfare on 1 February 1917 and the subsequent sinking of ten American merchant ships and the deaths of sixty-four crewmen were at the heart of Wilson’s statement. Recognizing that it would be months or possibly years before the United States could field a sizeable army in Europe, emissaries from Great Britain and France asked President Wilson to dispatch a token force to demonstrate American involvement in the conflict. Wilson directed Secretary of War Newton Baker and Secretary of the Navy Josephus Daniels to dispatch the vanguard of an American Expeditionary Force under the command of General John J. Pershing to Europe as soon as possible. US Army forces engaged in the hunt for

Pancho Villa on the Mexican border were redeployed to Hoboken, New Jersey, where they would board ships for the transAtlantic crossing. The Navy organized the escort forces to ensure their safe passage. To ship 15,000 troops and 40,000 tons of supplies to Europe, the Army chartered fourteen ships, organized into four groups. The first included a pair of ships from the New York and Cuba Mail Steam Ship Company, commonly referred to as the Ward Line. SS Havana and SS Saratoga were built at William Cramp &amp; Sons in Philadelphia and entered service in 1907. These twin-stack passenger liners, 429 feet in length and approximately 10,000 tons, had been providing regular service between New York and Havana. On 23 May 1917, the US Army chartered both vessels as part of the first convoy of American troopships heading to France. Cargo spaces were converted into temporary troop berthing, cooking and lavatory facilities, weapons were installed, and US Navy armed guard detachments were embarked. On 14 June, after loading elements of the Army’s 1st Infantry Division a few days earlier, they departed under the escort of the armed cruiser Seattle with Rear Admiral Albert Gleaves, commander of American convoy operations, onboard, and protected by a quartet of American destroyers. A few days out from France, Havana reported a suspected submarine attack when two torpedoes were sighted close aboard. Offloaded onto French soil, the troops were hurried into camps near the port of St. Nazaire, while one element was sent to Paris to march in formation down the Champs-Élysées. In a speech referring to the arrival of the American troops in the French capital, Colonel Charles E. Stanton exclaimed “Lafayette, we are here!” With Surgery onboard a hospital ship, 1918.