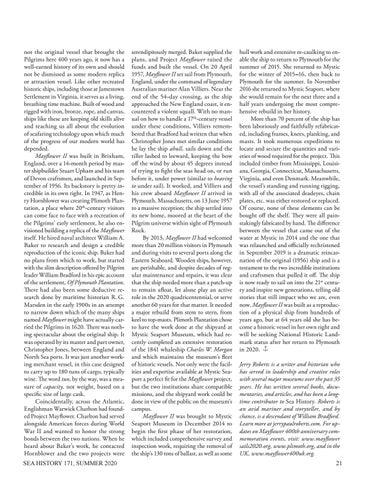 not the original vessel that brought the Pilgrims here 400 years ago, it now has a well-earned history of its own and should not be dismissed as some modern replica or attraction vessel. Like other recreated historic ships, including those at Jamestown Settlement in Virginia, it serves as a living, breathing time machine. Built of wood and rigged with iron, bronze, rope, and canvas, ships like these are keeping old skills alive and teaching us all about the evolution of seafaring technology upon which much of the progress of our modern world has depended. Mayflower II was built in Brixham, England, over a 14-month period by master shipbuilder Stuart Upham and his team of Devon craftsmen, and launched in September of 1956. Its backstory is pretty incredible in its own right. In 1947, as Henry Hornblower was creating Plimoth Plantation, a place where 20th-century visitors can come face to face with a recreation of the Pilgrims’ early settlement, he also envisioned building a replica of the Mayflower itself. He hired naval architect William A. Baker to research and design a credible reproduction of the iconic ship. Baker had no plans from which to work, but started with the slim description offered by Pilgrim leader William Bradford in his epic account of the settlement, Of Plymouth Plantation. There had also been some deductive research done by maritime historian R. G. Marsden in the early 1900s in an attempt to narrow down which of the many ships named Mayflower might have actually carried the Pilgrims in 1620. There was nothing spectacular about the original ship. It was operated by its master and part owner, Christopher Jones, between England and North Sea ports. It was just another working merchant vessel, in this case designed to carry up to 180 tuns of cargo, typically wine. The word tun, by the way, was a measure of capacity, not weight, based on a specific size of large cask. Coincidentally, across the Atlantic, Englishman Warwick Charlton had founded Project Mayflower. Charlton had served alongside American forces during World War II and wanted to honor the strong bonds between the two nations. When he heard about Baker’s work, he contacted Hornblower and the two projects were

serendipitously merged. Baker supplied the plans, and Project Mayflower raised the funds and built the vessel. On 20 April 1957, Mayflower II set sail from Plymouth, England, under the command of legendary Australian mariner Alan Villiers. Near the end of the 54-day crossing, as the ship approached the New England coast, it encountered a violent squall. With no manual on how to handle a 17th-century vessel under these conditions, Villiers remembered that Bradford had written that when Christopher Jones met similar conditions he lay the ship ahull, sails down and the tiller lashed to leeward, keeping the bow off the wind by about 45 degrees instead of trying to fight the seas head on, or run before it, under power (similar to heaving to under sail). It worked, and Villiers and his crew aboard Mayflower II arrived in Plymouth, Massachusetts, on 13 June 1957 to a massive reception; the ship settled into its new home, moored at the heart of the Pilgrim universe within sight of Plymouth Rock. By 2013, Mayflower II had welcomed more than 20 million visitors in Plymouth and during visits to several ports along the Eastern Seaboard. Wooden ships, however, are perishable, and despite decades of regular maintenance and repairs, it was clear that the ship needed more than a patch-up to remain afloat, let alone play an active role in the 2020 quadricentennial, or serve another 60 years for that matter. It needed a major rebuild from stem to stern, from keel to top-masts. Plimoth Plantation chose to have the work done at the shipyard at Mystic Seaport Museum, which had recently completed an extensive restoration of the 1841 whaleship Charles W. Morgan and which maintains the museum’s fleet of historic vessels. Not only were the facilities and expertise available at Mystic Seaport a perfect fit for the Mayflower project, but the two institutions share compatible missions, and the shipyard work could be done in view of the public on the museum’s campus. Mayflower II was brought to Mystic Seaport Museum in December 2014 to begin the first phase of her restoration, which included comprehensive survey and inspection work, requiring the removal of the ship’s 130 tons of ballast, as well as some

hull work and extensive re-caulking to enable the ship to return to Plymouth for the summer of 2015. She returned to Mystic for the winter of 2015–16, then back to Plymouth for the summer. In November 2016 she returned to Mystic Seaport, where she would remain for the next three and a half years undergoing the most comprehensive rebuild in her history. More than 70 percent of the ship has been laboriously and faithfully refabricated, including frames, knees, planking, and masts. It took numerous expeditions to locate and secure the quantities and varieties of wood required for the project. This included timber from Mississippi, Louisiana, Georgia, Connecticut, Massachusetts, Virginia, and even Denmark. Meanwhile, the vessel’s standing and running rigging, with all of the associated deadeyes, chain plates, etc. was either restored or replaced. Of course, none of these elements can be bought off the shelf. They were all painstakingly fabricated by hand. The difference between the vessel that came out of the water at Mystic in 2014 and the one that was relaunched and officially rechristened in September 2019 is a dramatic reincarnation of the original (1956) ship and is a testament to the two incredible institutions and craftsmen that pulled it off. The ship is now ready to sail on into the 21st century and inspire new generations, telling old stories that still impact who we are, even now. Mayflower II was built as a reproduction of a physical ship from hundreds of years ago, but at 64 years old she has become a historic vessel in her own right and will be seeking National Historic Landmark status after her return to Plymouth in 2020. Jerry Roberts is a writer and historian who has served in leadership and creative roles with several major museums over the past 35 years. He has written several books, documentaries, and articles, and has been a longtime contributor to Sea History. Roberts is an avid mariner and storyteller, and by chance, is a descendant of William Bradford. Learn more at jerrypaulroberts.com. For updates on Mayflower 400th anniversary commemoration events, visit: www.mayflower sails2020.org, www.plimoth.org, and in the UK, www.mayflower400uk.org.