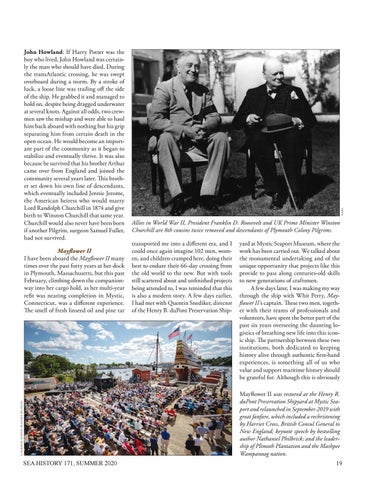 Mayflower II I have been aboard the Mayflower II many times over the past forty years at her dock in Plymouth, Massachusetts, but this past February, climbing down the companionway into her cargo hold, as her multi-year refit was nearing completion in Mystic, Connecticut, was a different experience. The smell of fresh linseed oil and pine tar

John Howland: If Harry Potter was the boy who lived, John Howland was certainly the man who should have died. During the transAtlantic crossing, he was swept overboard during a storm. By a stroke of luck, a loose line was trailing off the side of the ship. He grabbed it and managed to hold on, despite being dragged underwater at several knots. Against all odds, two crewmen saw the mishap and were able to haul him back aboard with nothing but his grip separating him from certain death in the open ocean. He would become an important part of the community as it began to stabilize and eventually thrive. It was also because he survived that his brother Arthur came over from England and joined the community several years later. This brother set down his own line of descendants, which eventually included Jennie Jerome, the American heiress who would marry Lord Randolph Churchill in 1874 and give birth to Winston Churchill that same year. Churchill would also never have been born if another Pilgrim, surgeon Samuel Fuller, had not survived.

Allies in World War II, President Franklin D. Roosevelt and UK Prime Minister Winston Churchill are 8th cousins twice removed and descendants of Plymouth Colony Pilgrims. transported me into a different era, and I could once again imagine 102 men, women, and children cramped here, doing their best to endure their 66-day crossing from the old world to the new. But with tools still scattered about and unfinished projects being attended to, I was reminded that this is also a modern story. A few days earlier, I had met with Quentin Snediker, director of the Henry B. duPont Preservation Ship-

yard at Mystic Seaport Museum, where the work has been carried out. We talked about the monumental undertaking and of the unique opportunity that projects like this provide to pass along centuries-old skills to new generations of craftsmen. A few days later, I was making my way through the ship with Whit Perry, Mayflower IIâ&amp;#x20AC;&amp;#x2122;s captain. These two men, together with their teams of professionals and volunteers, have spent the better part of the past six years overseeing the daunting logistics of breathing new life into this iconic ship. The partnership between these two institutions, both dedicated to keeping history alive through authentic first-hand experiences, is something all of us who value and support maritime history should be grateful for. Although this is obviously Mayflower II was restored at the Henry B. duPont Preservation Shipyard at Mystic Seaport and relaunched in September 2019 with great fanfare, which included a rechristening by Harriet Cross, British Consul General to New England; keynote speech by bestselling author Nathaniel Philbrick; and the leadership of Plimoth Plantation and the Mashpee Wampanoag nation.