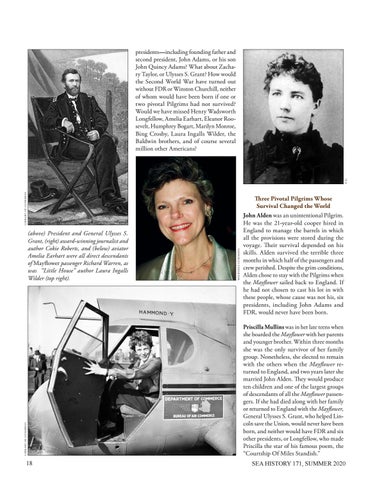 presidents—including founding father and second president, John Adams, or his son John Quincy Adams? What about Zachary Taylor, or Ulysses S. Grant? How would the Second World War have turned out without FDR or Winston Churchill, neither of whom would have been born if one or two pivotal Pilgrims had not survived? Would we have missed Henry Wadsworth Longfellow, Amelia Earhart, Eleanor Roosevelt, Humphrey Bogart, Marilyn Monroe, Bing Crosby, Laura Ingalls Wilder, the Baldwin brothers, and of course several million other Americans?

Three Pivotal Pilgrims Whose Survival Changed the World John Alden was an unintentional Pilgrim. He was the 21-year-old cooper hired in England to manage the barrels in which all the provisions were stored during the voyage. Their survival depended on his skills. Alden survived the terrible three months in which half of the passengers and crew perished. Despite the grim conditions, Alden chose to stay with the Pilgrims when the Mayflower sailed back to England. If he had not chosen to cast his lot in with these people, whose cause was not his, six presidents, including John Adams and FDR, would never have been born. Priscilla Mullins was in her late teens when she boarded the Mayflower with her parents and younger brother. Within three months she was the only survivor of her family group. Nonetheless, she elected to remain with the others when the Mayflower returned to England, and two years later she married John Alden. They would produce ten children and one of the largest groups of descendants of all the Mayflower passengers. If she had died along with her family or returned to England with the Mayflower, General Ulysses S. Grant, who helped Lincoln save the Union, would never have been born, and neither would have FDR and six other presidents, or Longfellow, who made Priscilla the star of his famous poem, the “Courtship Of Miles Standish.” SEA HISTORY 171, SUMMER 2020