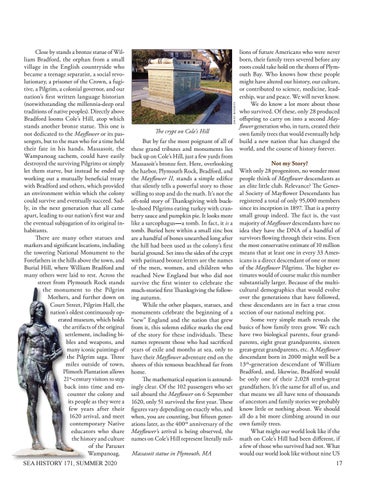 Close by stands a bronze statue of William Bradford, the orphan from a small village in the English countryside who became a teenage separatist, a social revolutionary, a prisoner of the Crown, a fugitive, a Pilgrim, a colonial governor, and our nation’s first written language historian (notwithstanding the millennia-deep oral traditions of native peoples). Directly above Bradford looms Cole’s Hill, atop which stands another bronze statue. This one is not dedicated to the Mayflower or its passengers, but to the man who for a time held their fate in his hands. Massasoit, the Wampanoag sachem, could have easily destroyed the surviving Pilgrims or simply let them starve, but instead he ended up working out a mutually beneficial treaty with Bradford and others, which provided an environment within which the colony could survive and eventually succeed. Sadly, in the next generation that all came apart, leading to our nation’s first war and the eventual subjugation of its original inhabitants. There are many other statues and markers and significant locations, including the towering National Monument to the Forefathers in the hills above the town, and Burial Hill, where William Bradford and many others were laid to rest. Across the street from Plymouth Rock stands the monument to the Pilgrim Mothers, and further down on Court Street, Pilgrim Hall, the nation’s oldest continuously operated museum, which holds the artifacts of the original settlement, including bibles and weapons, and many iconic paintings of the Pilgrim saga. Three miles outside of town, Plimoth Plantation allows 21st-century visitors to step back into time and encounter the colony and its people as they were a few years after their 1620 arrival, and meet contemporary Native educators who share the history and culture of the Patuxet Wampanoag.

The crypt on Cole’s Hill But by far the most poignant of all of these grand tributes and monuments lies back up on Cole’s Hill, just a few yards from Massasoit’s bronze feet. Here, overlooking the harbor, Plymouth Rock, Bradford, and the Mayflower II, stands a simple edifice that silently tells a powerful story to those willing to stop and do the math. It’s not the oft-told story of Thanksgiving with buckle-shoed Pilgrims eating turkey with cranberry sauce and pumpkin pie. It looks more like a sarcophagus—a tomb. In fact, it is a tomb. Buried here within a small zinc box are a handful of bones unearthed long after the hill had been used as the colony’s first burial ground. Set into the sides of the crypt with patinaed bronze letters are the names of the men, women, and children who reached New England but who did not survive the first winter to celebrate the much-storied first Thanksgiving the following autumn. While the other plaques, statues, and monuments celebrate the beginning of a “new” England and the nation that grew from it, this solemn edifice marks the end of the story for these individuals. These names represent those who had sacrificed years of exile and months at sea, only to have their Mayflower adventure end on the shores of this tenuous beachhead far from home. The mathematical equation is astoundingly clear. Of the 102 passengers who set sail aboard the Mayflower on 6 September 1620, only 51 survived the first year. These figures vary depending on exactly who, and when, you are counting, but fifteen generations later, as the 400th anniversary of the Mayflower’s arrival is being observed, the names on Cole’s Hill represent literally milMassasoit statue in Plymouth, MA

lions of future Americans who were never born, their family trees severed before any roots could take hold on the shores of Plymouth Bay. Who knows how these people might have altered our history, our culture, or contributed to science, medicine, leadership, war and peace. We will never know. We do know a lot more about those who survived. Of these, only 28 produced offspring to carry on into a second Mayflower generation who, in turn, created their own family trees that would eventually help build a new nation that has changed the world, and the course of history forever. Not my Story? With only 28 progenitors, no wonder most people think of Mayflower descendants as an elite little club. Relevance? The General Society of Mayflower Descendants has registered a total of only 95,000 members since its inception in 1897. That is a pretty small group indeed. The fact is, the vast majority of Mayflower descendants have no idea they have the DNA of a handful of survivors flowing through their veins. Even the most conservative estimate of 10 million means that at least one in every 33 Americans is a direct descendant of one or more of the Mayflower Pilgrims. The higher estimates would of course make this number substantially larger. Because of the multicultural demographics that would evolve over the generations that have followed, these descendants are in fact a true cross section of our national melting pot. Some very simple math reveals the basics of how family trees grow. We each have two biological parents, four grandparents, eight great grandparents, sixteen great-great grandparents, etc. A Mayflower descendant born in 2000 might well be a 13th-generation descendant of William Bradford, and, likewise, Bradford would be only one of their 2,028 tenth-great grandfathers. It’s the same for all of us, and that means we all have tens of thousands of ancestors and family stories we probably know little or nothing about. We should all do a bit more climbing around in our own family trees. What might our world look like if the math on Cole’s Hill had been different, if a few of those who survived had not. What would our world look like without nine US