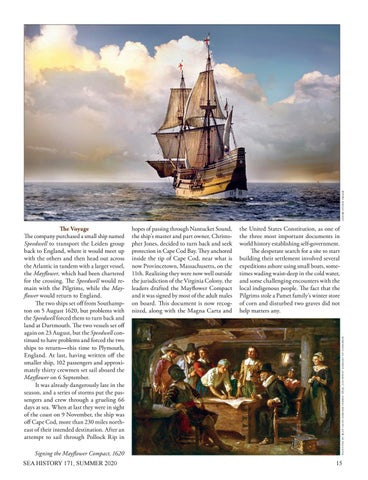 hopes of passing through Nantucket Sound, the ship’s master and part owner, Christopher Jones, decided to turn back and seek protection in Cape Cod Bay. They anchored inside the tip of Cape Cod, near what is now Provincetown, Massachusetts, on the 11th. Realizing they were now well outside the jurisdiction of the Virginia Colony, the leaders drafted the Mayflower Compact and it was signed by most of the adult males on board. This document is now recognized, along with the Magna Carta and

the United States Constitution, as one of the three most important documents in world history establishing self-government. The desperate search for a site to start building their settlement involved several expeditions ashore using small boats, sometimes wading waist-deep in the cold water, and some challenging encounters with the local indigenous people. The fact that the Pilgrims stole a Pamet family’s winter store of corn and disturbed two graves did not help matters any.

The Voyage The company purchased a small ship named Speedwell to transport the Leiden group back to England, where it would meet up with the others and then head out across the Atlantic in tandem with a larger vessel, the Mayflower, which had been chartered for the crossing. The Speedwell would remain with the Pilgrims, while the Mayflower would return to England. The two ships set off from Southampton on 5 August 1620, but problems with the Speedwell forced them to turn back and land at Dartmouth. The two vessels set off again on 23 August, but the Speedwell continued to have problems and forced the two ships to return—this time to Plymouth, England. At last, having written off the smaller ship, 102 passengers and approximately thirty crewmen set sail aboard the Mayflower on 6 September. It was already dangerously late in the season, and a series of storms put the passengers and crew through a grueling 66 days at sea. When at last they were in sight of the coast on 9 November, the ship was off Cape Cod, more than 230 miles northeast of their intended destination. After an attempt to sail through Pollock Rip in