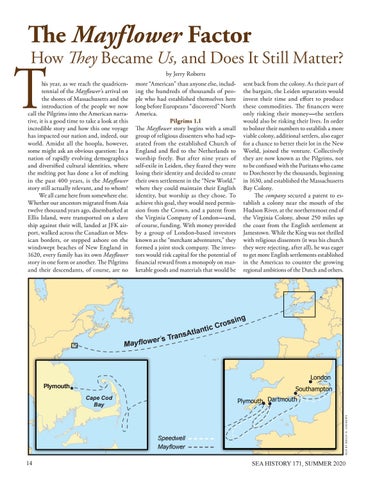 How They Became Us, and Does It Still Matter?

his year, as we reach the quadricentennial of the Mayflower’s arrival on the shores of Massachusetts and the introduction of the people we now call the Pilgrims into the American narrative, it is a good time to take a look at this incredible story and how this one voyage has impacted our nation and, indeed, our world. Amidst all the hoopla, however, some might ask an obvious question: In a nation of rapidly evolving demographics and diversified cultural identities, where the melting pot has done a lot of melting in the past 400 years, is the Mayflower story still actually relevant, and to whom? We all came here from somewhere else. Whether our ancestors migrated from Asia twelve thousand years ago, disembarked at Ellis Island, were transported on a slave ship against their will, landed at JFK airport, walked across the Canadian or Mexican borders, or stepped ashore on the windswept beaches of New England in 1620, every family has its own Mayflower story in one form or another. The Pilgrims and their descendants, of course, are no

more “American” than anyone else, including the hundreds of thousands of people who had established themselves here long before Europeans “discovered” North America. Pilgrims 1.1 The Mayflower story begins with a small group of religious dissenters who had separated from the established Church of England and fled to the Netherlands to worship freely. But after nine years of self-exile in Leiden, they feared they were losing their identity and decided to create their own settlement in the “New World,” where they could maintain their English identity, but worship as they chose. To achieve this goal, they would need permission from the Crown, and a patent from the Virginia Company of London—and, of course, funding. With money provided by a group of London-based investors known as the “merchant adventurers,” they formed a joint stock company. The investors would risk capital for the potential of financial reward from a monopoly on marketable goods and materials that would be

sent back from the colony. As their part of the bargain, the Leiden separatists would invest their time and effort to produce these commodities. The financers were only risking their money—the settlers would also be risking their lives. In order to bolster their numbers to establish a more viable colony, additional settlers, also eager for a chance to better their lot in the New World, joined the venture. Collectively they are now known as the Pilgrims, not to be confused with the Puritans who came to Dorchester by the thousands, beginning in 1630, and established the Massachusetts Bay Colony. The company secured a patent to establish a colony near the mouth of the Hudson River, at the northernmost end of the Virginia Colony, about 250 miles up the coast from the English settlement at Jamestown. While the King was not thrilled with religious dissenters (it was his church they were rejecting, after all), he was eager to get more English settlements established in the Americas to counter the growing regional ambitions of the Dutch and others.