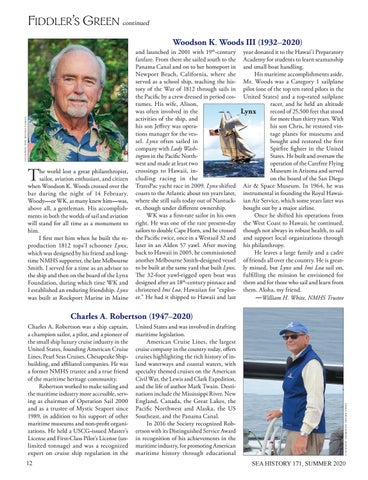 he world lost a great philanthropist, sailor, aviation enthusiast, and citizen when Woodson K. Woods crossed over the bar during the night of 14 February. Woody—or WK, as many knew him—was, above all, a gentleman. His accomplishments in both the worlds of sail and aviation will stand for all time as a monument to him. I first met him when he built the reproduction 1812 tops’l schooner Lynx, which was designed by his friend and longtime NMHS supporter, the late Melbourne Smith. I served for a time as an advisor to the ship and then on the board of the Lynx Foundation, during which time WK and I established an enduring friendship. Lynx was built at Rockport Marine in Maine

and launched in 2001 with 19th-century fanfare. From there she sailed south to the Panama Canal and on to her homeport in Newport Beach, California, where she served as a school ship, teaching the history of the War of 1812 through sails in the Pacific by a crew dressed in period costumes. His wife, Alison, was often involved in the activities of the ship, and his son Jeffrey was operations manager for the vessel. Lynx often sailed in company with Lady Washington in the Pacific Northwest and made at least two crossings to Hawaii, including racing in the TransPac yacht race in 2009. Lynx shifted coasts to the Atlantic about ten years later, where she still sails today out of Nantucket, though under different ownership. WK was a first-rate sailor in his own right. He was one of the rare present-day sailors to double Cape Horn, and he crossed the Pacific twice, once in a Westsail 32 and later in an Alden 57 yawl. After moving back to Hawaii in 2005, he commissioned another Melbourne Smith-designed vessel to be built at the same yard that built Lynx. The 32-foot yawl-rigged open boat was designed after an 18th-century pinnace and christened Imi Loa, Hawaiian for “explorer.” He had it shipped to Hawaii and last

year donated it to the Hawai’i Preparatory Academy for students to learn seamanship and small boat handling. His maritime accomplishments aside, Mr. Woods was a Category 1 sailplane pilot (one of the top ten rated pilots in the United States) and a top-rated sailplane racer, and he held an altitude record of 25,500 feet that stood Lynx for more than thirty years. With his son Chris, he restored vintage planes for museums and bought and restored the first Spitfire fighter in the United States. He built and oversaw the operation of the Carefree Flying Museum in Arizona and served on the board of the San Diego Air &amp; Space Museum. In 1964, he was instrumental in founding the Royal Hawaiian Air Service, which some years later was bought out by a major airline. Once he shifted his operations from the West Coast to Hawaii, he continued, though not always in robust health, to sail and support local organizations through his philanthropy. He leaves a large family and a cadre of friends all over the country. He is greatly missed, but Lynx and Imi Loa sail on, fulfilling the mission he envisioned for them and for those who sail and learn from them. Aloha, my friend. —William H. White, NMHS Trustee

Charles A. Robertson was a ship captain, a champion sailor, a pilot, and a pioneer of the small ship luxury cruise industry in the United States, founding American Cruise Lines, Pearl Seas Cruises, Chesapeake Shipbuilding, and affiliated companies. He was a former NMHS trustee and a true friend of the maritime heritage community. Robertson worked to make sailing and the maritime industry more accessible, serving as chairman of Operation Sail 2000 and as a trustee of Mystic Seaport since 1989, in addition to his support of other maritime museums and non-profit organizations. He held a USCG-issued Master’s License and First-Class Pilot’s License (unlimited tonnage) and was a recognized expert on cruise ship regulation in the 12

United States and was involved in drafting maritime legislation. American Cruise Lines, the largest cruise company in the country today, offers cruises highlighting the rich history of inland waterways and coastal waters, with specialty themed cruises on the American Civil War, the Lewis and Clark Expedition, and the life of author Mark Twain. Destinations include the Mississippi River, New England, Canada, the Great Lakes, the Pacific Northwest and Alaska, the US Southeast, and the Panama Canal. In 2016 the Society recognized Robertson with its Distinguished Service Award in recognition of his achievements in the maritime industry, for promoting American maritime history through educational