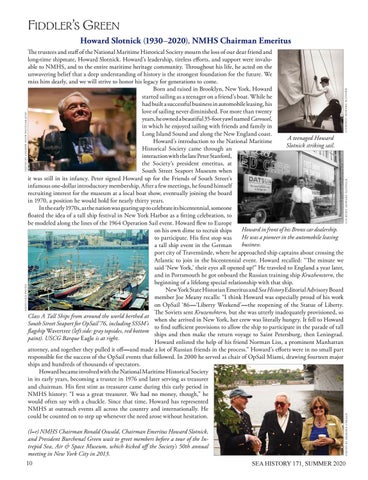 The trustees and staff of the National Maritime Historical Society mourn the loss of our dear friend and long-time shipmate, Howard Slotnick. Howard’s leadership, tireless efforts, and support were invaluable to NMHS, and to the entire maritime heritage community. Throughout his life, he acted on the unwavering belief that a deep understanding of history is the strongest foundation for the future. We miss him dearly, and we will strive to honor his legacy for generations to come. Born and raised in Brooklyn, New York, Howard started sailing as a teenager on a friend’s boat. While he had built a successful business in automobile leasing, his love of sailing never diminished. For more than twenty years, he owned a beautiful 35-foot yawl named Carousel, in which he enjoyed sailing with friends and family in Long Island Sound and along the New England coast. A teenaged Howard Howard’s introduction to the National Maritime Slotnick striking sail. Historical Society came through an interaction with the late Peter Stanford, the Society’s president emeritus, at South Street Seaport Museum when it was still in its infancy. Peter signed Howard up for the Friends of South Street’s infamous one-dollar introductory membership. After a few meetings, he found himself recruiting interest for the museum at a local boat show, eventually joining the board in 1970, a position he would hold for nearly thirty years. In the early 1970s, as the nation was gearing up to celebrate its bicentennial, someone floated the idea of a tall ship festival in New York Harbor as a fitting celebration, to be modeled along the lines of the 1964 Operation Sail event. Howard flew to Europe Howard in front of his Bronx car dealership. on his own dime to recruit ships He was a pioneer in the automobile leasing to participate. His first stop was business. a tall ship event in the German port city of Travemünde, where he approached ship captains about crossing the Atlantic to join in the bicentennial event. Howard recalled: “The minute we said ‘New York,’ their eyes all opened up!” He traveled to England a year later, and in Portsmouth he got onboard the Russian training ship Kruzhenstern, the beginning of a lifelong special relationship with that ship. New York State Historian Emeritus and Sea History Editorial Advisory Board member Joe Meany recalls: “I think Howard was especially proud of his work on OpSail ‘86—‘Liberty Weekend’—the reopening of the Statue of Liberty. The Soviets sent Kruzenshtern, but she was utterly inadequately provisioned, so Class A Tall Ships from around the world berthed at when she arrived in New York, her crew was literally hungry. It fell to Howard South Street Seaport for OpSail ’ 76, including SSSM’s to find sufficient provisions to allow the ship to participate in the parade of tall flagship Wavertree (left side: gray topsides, red bottom ships and then make the return voyage to Saint Petersburg, then Leningrad. paint). USCG Barque Eagle is at right. Howard enlisted the help of his friend Norman Liss, a prominent Manhattan attorney, and together they pulled it off—and made a lot of Russian friends in the process.” Howard’s efforts were in no small part responsible for the success of the OpSail events that followed. In 2000 he served as chair of OpSail Miami, drawing fourteen major ships and hundreds of thousands of spectators. Howard became involved with the National Maritime Historical Society in its early years, becoming a trustee in 1976 and later serving as treasurer and chairman. His first stint as treasurer came during this early period in NMHS history: “I was a great treasurer. We had no money, though,” he would often say with a chuckle. Since that time, Howard has represented NMHS at outreach events all across the country and internationally. He could be counted on to step up whenever the need arose without hesitation.