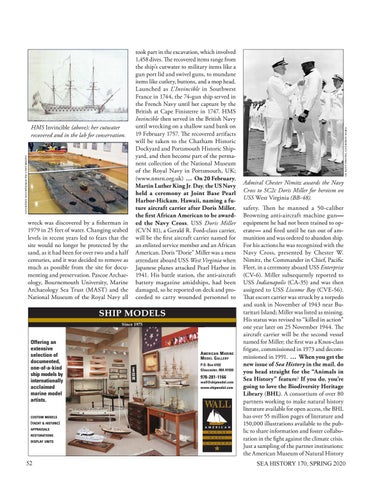 wreck was discovered by a fisherman in 1979 in 25 feet of water. Changing seabed levels in recent years led to fears that the site would no longer be protected by the sand, as it had been for over two and a half centuries, and it was decided to remove as much as possible from the site for documenting and preservation. Pascoe Archaeology, Bournemouth University, Marine Archaeology Sea Trust (MAST) and the National Museum of the Royal Navy all

HMS Invincible (above); her cutwater recovered and in the lab for conservation.

took part in the excavation, which involved 1,458 dives. The recovered items range from the ship’s cutwater to military items like a gun port lid and swivel guns, to mundane items like cutlery, buttons, and a mop head. Launched as L’Invincible in Southwest France in 1744, the 74-gun ship served in the French Navy until her capture by the British at Cape Finisterre in 1747. HMS Invincible then served in the British Navy until wrecking on a shallow sand bank on 19 February 1757. The recovered artifacts will be taken to the Chatham Historic Dockyard and Portsmouth Historic Shipyard, and then become part of the permanent collection of the National Museum of the Royal Navy in Portsmouth, UK; (www.nmrn.org.uk) … On 20 February, Martin Luther King Jr. Day, the US Navy held a ceremony at Joint Base Pearl Harbor-Hickam, Hawaii, naming a future aircraft carrier after Doris Miller, the first African American to be awarded the Navy Cross. USS Doris Miller (CVN 81), a Gerald R. Ford-class carrier, will be the first aircraft carrier named for an enlisted service member and an African American. Doris “Dorie” Miller was a mess attendant aboard USS West Virginia when Japanese planes attacked Pearl Harbor in 1941. His battle station, the anti-aircraft battery magazine amidships, had been Stre on deck and prodamaged, so he Pleasant reported ceeded to carry wounded20personnel to

Admiral Chester Nimitz awards the Navy Cross to SC2c Doris Miller for heroism on USS West Virginia (BB-48). safety. Then he manned a 50-caliber Browning anti-aircraft machine gun— equipment he had not been trained to operate— and fired until he ran out of ammunition and was ordered to abandon ship. For his actions he was recognized with the Navy Cross, presented by Chester W. Nimitz, the Commander in Chief, Pacific Fleet, in a ceremony aboard USS Enterprise (CV-6). Miller subsequently reported to USS Indianapolis (CA-35) and was then assigned to USS Liscome Bay (CVE-56). That escort carrier was struck by a torpedo and sunk in November of 1943 near Butaritari Island; Miller was listed as missing. His status was revised to “killed in action” one year later on 25 November 1944. The aircraft carrier will be the second vessel named for Miller; the first was a Knox-class frigate, commissioned in 1973 and decommissioned in 1991. … When you get the new issue of Sea History in the mail, do you head straight for the “Animals in Sea History” feature? If you do, you’re going to love the Biodiversity Heritage Library (BHL). A consortium of over 80 partners working to make natural history literature available for open access, the BHL has over 55 million pages of literature and 150,000 illustrations available to the public to share information and foster collaboration in the fight against the climate crisis. Just a sampling of the partner institutions: the American Museum of Natural History SEA HISTORY 170, SPRING 2020