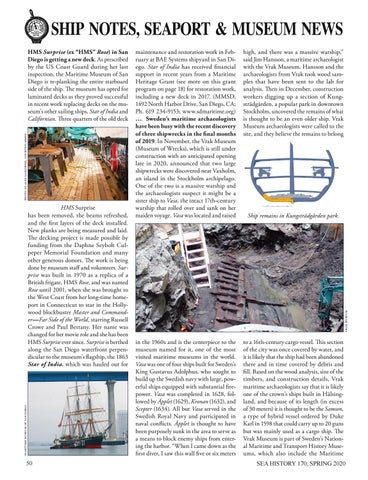 HMS Surprise has been removed, the beams refreshed, and the first layers of the deck installed. New planks are being measured and laid. The decking project is made possible by funding from the Daphne Seybolt Culpeper Memorial Foundation and many other generous donors. The work is being done by museum staff and volunteers. Surprise was built in 1970 as a replica of a British frigate, HMS Rose, and was named Rose until 2001, when she was brought to the West Coast from her long-time homeport in Connecticut to star in the Hollywood blockbuster Master and Commander—Far Side of the World, starring Russell Crowe and Paul Bettany. Her name was changed for her movie role and she has been HMS Surprise ever since. Surprise is berthed along the San Diego waterfront perpendicular to the museum’s flagship, the 1863 Star of India, which was hauled out for

maintenance and restoration work in February at BAE Systems shipyard in San Diego. Star of India has received financial support in recent years from a Maritime Heritage Grant (see more on this grant program on page 18) for restoration work, including a new deck in 2017. (MMSD, 1492 North Harbor Drive, San Diego, CA; Ph. 619 234-9153; www.sdmaritime.org) … Sweden’s maritime archaeologists have been busy with the recent discovery of three shipwrecks in the final months of 2019. In November, the Vrak Museum (Museum of Wrecks), which is still under construction with an anticipated opening late in 2020, announced that two large shipwrecks were discovered near Vaxholm, an island in the Stockholm archipelago. One of the two is a massive warship and the archaeologists suspect it might be a sister ship to Vasa, the intact 17th-century warship that rolled over and sank on her maiden voyage. Vasa was located and raised

high, and there was a massive warship,” said Jim Hansson, a maritime archaeologist with the Vrak Museum. Hansson and the archaeologists from Vrak took wood samples that have been sent to the lab for analysis. Then in December, construction workers digging up a section of Kungsträdgården, a popular park in downtown Stockholm, uncovered the remains of what is thought to be an even older ship. Vrak Museum archaeologists were called to the site, and they believe the remains to belong

in the 1960s and is the centerpiece to the museum named for it, one of the most visited maritime museums in the world. Vasa was one of four ships built for Sweden’s King Gustavus Adolphus, who sought to build up the Swedish navy with large, powerful ships equipped with substantial firepower. Vasa was completed in 1628, followed by Äpplet (1629), Kronan (1632), and Scepter (1634). All but Vasa served in the Swedish Royal Navy and participated in naval conflicts. Äpplet is thought to have been purposely sunk in the area to serve as a means to block enemy ships from entering the harbor. “When I came down as the first diver, I saw this wall five or six meters

to a 16th-century cargo vessel. This section of the city was once covered by water, and it is likely that the ship had been abandoned there and in time covered by debris and fill. Based on the wood analysis, size of the timbers, and construction details, Vrak maritime archaeologists say that it is likely one of the crown’s ships built in Hälsingland, and because of its length (in excess of 30 meters) it is thought to be the Samson, a type of hybrid vessel ordered by Duke Karl in 1598 that could carry up to 20 guns but was mainly used as a cargo ship. The Vrak Museum is part of Sweden’s National Maritime and Transport History Museums, which also include the Maritime

HMS Surprise (ex “HMS” Rose) in San Diego is getting a new deck. As prescribed by the US Coast Guard during her last inspection, the Maritime Museum of San Diego is re-planking the entire starboard side of the ship. The museum has opted for laminated decks as they proved successful in recent work replacing decks on the museum’s other sailing ships, Star of India and Californian. Three quarters of the old deck