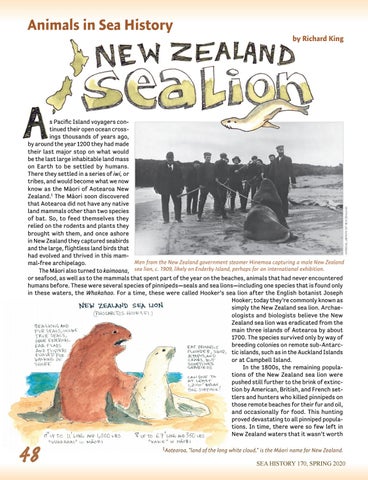 s Pacific Island voyagers continued their open ocean crossings thousands of years ago, by around the year 1200 they had made their last major stop on what would be the last large inhabitable land mass on Earth to be settled by humans. There they settled in a series of iwi, or tribes, and would become what we now know as the Māori of Aotearoa New Zealand.1 The Māori soon discovered that Aotearoa did not have any native land mammals other than two species of bat. So, to feed themselves they relied on the rodents and plants they brought with them, and once ashore in New Zealand they captured seabirds and the large, flightless land birds that had evolved and thrived in this mamMen from the New Zealand government steamer Hinemoa capturing a male New Zealand mal-free archipelago. The Māori also turned to kaimoana, sea lion, c. 1909, likely on Enderby Island, perhaps for an international exhibition. or seafood, as well as to the mammals that spent part of the year on the beaches, animals that had never encountered humans before. These were several species of pinnipeds—seals and sea lions—including one species that is found only in these waters, the Whakahao. For a time, these were called Hooker’s sea lion after the English botanist Joseph Hooker; today they’re commonly known as simply the New Zealand sea lion. Archaeologists and biologists believe the New Zealand sea lion was eradicated from the main three islands of Aotearoa by about 1700. The species survived only by way of breeding colonies on remote sub-Antarctic islands, such as in the Auckland Islands or at Campbell Island. In the 1800s, the remaining populations of the New Zealand sea lion were pushed still further to the brink of extinction by American, British, and French settlers and hunters who killed pinnipeds on those remote beaches for their fur and oil, and occasionally for food. This hunting proved devastating to all pinniped populations. In time, there were so few left in New Zealand waters that it wasn’t worth

“land of the long white cloud,” is the Māori name for New Zealand.