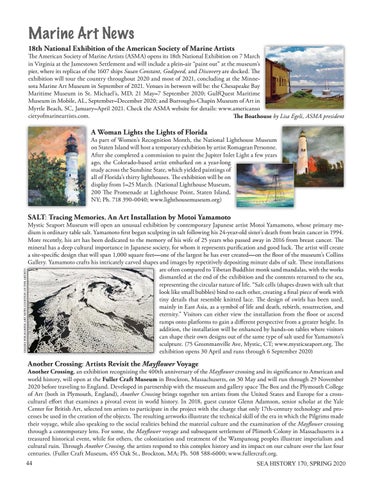 18th National Exhibition of the American Society of Marine Artists

The American Society of Marine Artists (ASMA) opens its 18th National Exhibition on 7 March in Virginia at the Jamestown Settlement and will include a plein-air “paint out” at the museum’s pier, where its replicas of the 1607 ships Susan Constant, Godspeed, and Discovery are docked. The exhibition will tour the country throughout 2020 and most of 2021, concluding at the Minnesota Marine Art Museum in September of 2021. Venues in between will be: the Chesapeake Bay Maritime Museum in St. Michael’s, MD, 21 May–7 September 2020; GulfQuest Maritime Museum in Mobile, AL, September–December 2020; and Burroughs-Chapin Museum of Art in Myrtle Beach, SC, January–April 2021. Check the ASMA website for details: www.americanso cietyofmarineartists.com. The Boathouse by Lisa Egeli, ASMA president

A Woman Lights the Lights of Florida

As part of Women’s Recognition Month, the National Lighthouse Museum on Staten Island will host a temporary exhibition by artist Romagean Personne. After she completed a commission to paint the Jupiter Inlet Light a few years ago, the Colorado-based artist embarked on a year-long study across the Sunshine State, which yielded paintings of all of Florida’s thirty lighthouses. The exhibition will be on display from 1–25 March. (National Lighthouse Museum, 200 The Promenade at Lighthouse Point, Staten Island, NY; Ph. 718 390-0040; www.lighthousemuseum.org)

images for marine art news courtesy of the artists

Mystic Seaport Museum will open an unusual exhibition by contemporary Japanese artist Motoi Yamamoto, whose primary medium is ordinary table salt. Yamamoto first began sculpting in salt following his 24-year-old sister’s death from brain cancer in 1994. More recently, his art has been dedicated to the memory of his wife of 25 years who passed away in 2016 from breast cancer. The mineral has a deep cultural importance in Japanese society, for whom it represents purification and good luck. The artist will create a site-specific design that will span 1,000 square feet—one of the largest he has ever created—on the floor of the museum’s Collins Gallery. Yamamoto crafts his intricately carved shapes and images by repetitively depositing minute dabs of salt. These installations are often compared to Tibetan Buddhist monk sand mandalas, with the works dismantled at the end of the exhibition and the contents returned to the sea, representing the circular nature of life. “Salt cells (shapes drawn with salt that look like small bubbles) bind to each other, creating a final piece of work with tiny details that resemble knitted lace. The design of swirls has been used, mainly in East Asia, as a symbol of life and death, rebirth, resurrection, and eternity.” Visitors can either view the installation from the floor or ascend ramps onto platforms to gain a different perspective from a greater height. In addition, the installation will be enhanced by hands-on tables where visitors can shape their own designs out of the same type of salt used for Yamamoto’s sculpture. (75 Greenmanville Ave, Mystic, CT; www.mysticseaport.org. The exhibition opens 30 April and runs through 6 September 2020)

Another Crossing, an exhibition recognizing the 400th anniversary of the Mayflower crossing and its significance to American and world history, will open at the Fuller Craft Museum in Brockton, Massachusetts, on 30 May and will run through 29 November 2020 before traveling to England. Developed in partnership with the museum and gallery space The Box and the Plymouth College of Art (both in Plymouth, England), Another Crossing brings together ten artists from the United States and Europe for a crosscultural effort that examines a pivotal event in world history. In 2018, guest curator Glenn Adamson, senior scholar at the Yale Center for British Art, selected ten artists to participate in the project with the charge that only 17th-century technology and processes be used in the creation of the objects. The resulting artworks illustrate the technical skill of the era in which the Pilgrims made their voyage, while also speaking to the social realities behind the material culture and the examination of the Mayflower crossing through a contemporary lens. For some, the Mayflower voyage and subsequent settlement of Plimoth Colony in Massachusetts is a treasured historical event, while for others, the colonization and treatment of the Wampanoag peoples illustrate imperialism and cultural ruin. Through Another Crossing, the artists respond to this complex history and its impact on our culture over the last four centuries. (Fuller Craft Museum, 455 Oak St., Brockton, MA; Ph. 508 588-6000; www.fullercraft.org. 44