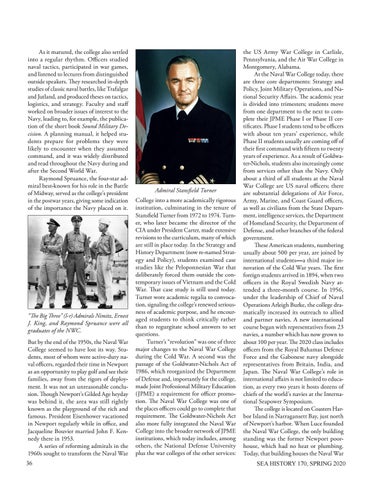 As it matured, the college also settled into a regular rhythm. Officers studied naval tactics, participated in war games, and listened to lectures from distinguished outside speakers. They researched in-depth studies of classic naval battles, like Trafalgar and Jutland, and produced theses on tactics, logistics, and strategy. Faculty and staff worked on broader issues of interest to the Navy, leading to, for example, the publication of the short book Sound Military Decision. A planning manual, it helped students prepare for problems they were likely to encounter when they assumed command, and it was widely distributed and read throughout the Navy during and after the Second World War. Raymond Spruance, the four-star admiral best-known for his role in the Battle of Midway, served as the college’s president in the postwar years, giving some indication of the importance the Navy placed on it.

“The Big Three” (l-r) Admirals Nimitz, Ernest J. King, and Raymond Spruance were all graduates of the NWC. But by the end of the 1950s, the Naval War College seemed to have lost its way. Students, most of whom were active-duty naval officers, regarded their time in Newport as an opportunity to play golf and see their families, away from the rigors of deployment. It was not an unreasonable conclusion. Though Newport’s Gilded Age heyday was behind it, the area was still rightly known as the playground of the rich and famous. President Eisenhower vacationed in Newport regularly while in office, and Jacqueline Bouvier married John F. Kennedy there in 1953. A series of reforming admirals in the 1960s sought to transform the Naval War 36

Admiral Stansfield Turner College into a more academically rigorous institution, culminating in the tenure of Stansfield Turner from 1972 to 1974. Turner, who later became the director of the CIA under President Carter, made extensive revisions to the curriculum, many of which are still in place today. In the Strategy and History Department (now re-named Strategy and Policy), students examined case studies like the Peloponnesian War that deliberately forced them outside the contemporary issues of Vietnam and the Cold War. That case study is still used today. Turner wore academic regalia to convocation, signaling the college’s renewed seriousness of academic purpose, and he encouraged students to think critically rather than to regurgitate school answers to set questions. Turner’s “revolution” was one of three major changes to the Naval War College during the Cold War. A second was the passage of the Goldwater-Nichols Act of 1986, which reorganized the Department of Defense and, importantly for the college, made Joint Professional Military Education (JPME) a requirement for officer promotion. The Naval War College was one of the places officers could go to complete that requirement. The Goldwater-Nichols Act also more fully integrated the Naval War College into the broader network of JPME institutions, which today includes, among others, the National Defense University plus the war colleges of the other services:

the US Army War College in Carlisle, Pennsylvania, and the Air War College in Montgomery, Alabama. At the Naval War College today, there are three core departments: Strategy and Policy, Joint Military Operations, and National Security Affairs. The academic year is divided into trimesters; students move from one department to the next to complete their JPME Phase I or Phase II certificates. Phase I students tend to be officers with about ten years’ experience, while Phase II students usually are coming off of their first command with fifteen to twenty years of experience. As a result of Goldwater-Nichols, students also increasingly come from services other than the Navy. Only about a third of all students at the Naval War College are US naval officers; there are substantial delegations of Air Force, Army, Marine, and Coast Guard officers, as well as civilians from the State Department, intelligence services, the Department of Homeland Security, the Department of Defense, and other branches of the federal government. These American students, numbering usually about 500 per year, are joined by international students—a third major innovation of the Cold War years. The first foreign students arrived in 1894, when two officers in the Royal Swedish Navy attended a three-month course. In 1956, under the leadership of Chief of Naval Operations Arleigh Burke, the college dramatically increased its outreach to allied and partner navies. A new international course began with representatives from 23 navies, a number which has now grown to about 100 per year. The 2020 class includes officers from the Royal Bahamas Defence Force and the Gabonese navy alongside representatives from Britain, India, and Japan. The Naval War College’s role in international affairs is not limited to education, as every two years it hosts dozens of chiefs of the world’s navies at the International Seapower Symposium. The college is located on Coasters Harbor Island in Narragansett Bay, just north of Newport’s harbor. When Luce founded the Naval War College, the only building standing was the former Newport poorhouse, which had no heat or plumbing. Today, that building houses the Naval War SEA HISTORY 170, SPRING 2020