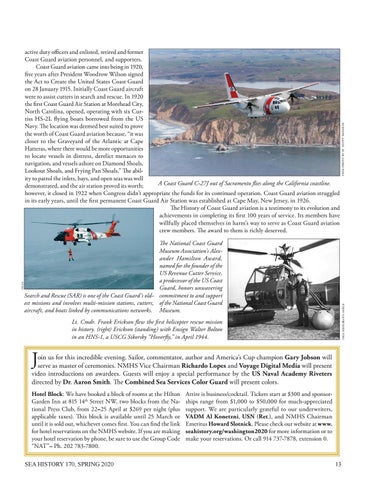 active duty officers and enlisted, retired and former Coast Guard aviation personnel, and supporters. Coast Guard aviation came into being in 1920, five years after President Woodrow Wilson signed the Act to Create the United States Coast Guard on 28 January 1915. Initially Coast Guard aircraft were to assist cutters in search and rescue. In 1920 the first Coast Guard Air Station at Morehead City, North Carolina, opened, operating with six Curtiss HS-2L flying boats borrowed from the US Navy. The location was deemed best suited to prove the worth of Coast Guard aviation because, “it was closer to the Graveyard of the Atlantic at Cape Hatteras, where there would be more opportunities to locate vessels in distress, derelict menaces to navigation, and vessels ashore on Diamond Shoals, Lookout Shoals, and Frying Pan Shoals.” The ability to patrol the inlets, bays, and open seas was well A Coast Guard C-27J out of Sacramento flies along the California coastline. demonstrated, and the air station proved its worth; however, it closed in 1922 when Congress didn’t appropriate the funds for its continued operation. Coast Guard aviation struggled in its early years, until the first permanent Coast Guard Air Station was established at Cape May, New Jersey, in 1926. The History of Coast Guard aviation is a testimony to its evolution and achievements in completing its first 100 years of service. Its members have willfully placed themselves in harm’s way to serve as Coast Guard aviation crew members. The award to them is richly deserved.

oin us for this incredible evening. Sailor, commentator, author and America’s Cup champion Gary Jobson will serve as master of ceremonies. NMHS Vice Chairman Richardo Lopes and Voyage Digital Media will present video introductions on awardees. Guests will enjoy a special performance by the US Naval Academy Riveters directed by Dr. Aaron Smith. The Combined Sea Services Color Guard will present colors. Hotel Block: We have booked a block of rooms at the Hilton Garden Inn at 815 14th Street NW, two blocks from the National Press Club, from 22–25 April at $269 per night (plus applicable taxes). This block is available until 25 March or until it is sold out, whichever comes first. You can find the link for hotel reservations on the NMHS website. If you are making your hotel reservation by phone, be sure to use the Group Code “NAT”– Ph. 202 783-7800.

Attire is business/cocktail. Tickets start at $300 and sponsorships range from $1,000 to $50,000 for much-appreciated support. We are particularly grateful to our underwriters, VADM Al Konetzni, USN (Ret.), and NMHS Chairman Emeritus Howard Slotnick. Please check our website at www. seahistory.org/washington2020 for more information or to make your reservations. Or call 914 737-7878, extension 0.