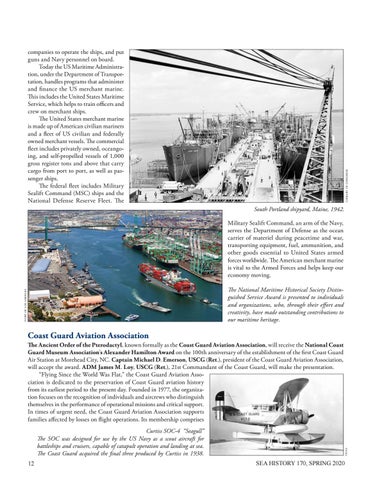 companies to operate the ships, and put guns and Navy personnel on board. Today the US Maritime Administration, under the Department of Transportation, handles programs that administer and finance the US merchant marine. This includes the United States Maritime Service, which helps to train officers and crew on merchant ships. The United States merchant marine is made up of American civilian mariners and a fleet of US civilian and federally owned merchant vessels. The commercial fleet includes privately owned, oceangoing, and self-propelled vessels of 1,000 gross register tons and above that carry cargo from port to port, as well as passenger ships. The federal fleet includes Military Sealift Command (MSC) ships and the National Defense Reserve Fleet. The

South Portland shipyard, Maine, 1942. Military Sealift Command, an arm of the Navy, serves the Department of Defense as the ocean carrier of materiel during peacetime and war, transporting equipment, fuel, ammunition, and other goods essential to United States armed forces worldwide. The American merchant marine is vital to the Armed Forces and helps keep our economy moving. port of los angeles

The National Maritime Historical Society Distinguished Service Award is presented to individuals and organizations, who, through their effort and creativity, have made outstanding contributions to our maritime heritage.

Curtiss SOC-4 “Seagull” The SOC was designed for use by the US Navy as a scout aircraft for battleships and cruisers, capable of catapult operation and landing at sea. The Coast Guard acquired the final three produced by Curtiss in 1938. 12