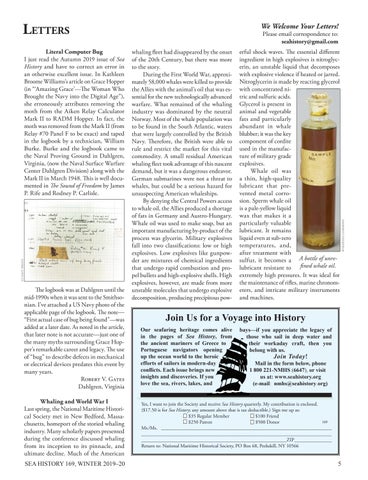 The logbook was at Dahlgren until the mid-1990s when it was sent to the Smithsonian. I’ve attached a US Navy photo of the applicable page of the logbook. The note— “First actual case of bug being found”—was added at a later date. As noted in the article, that later note is not accurate—just one of the many myths surrounding Grace Hopper’s remarkable career and legacy. The use of “bug” to describe defects in mechanical or electrical devices predates this event by many years. Robert V. Gates Dahlgren, Virginia Whaling and World War I Last spring, the National Maritime Historical Society met in New Bedford, Massachusetts, homeport of the storied whaling industry. Many scholarly papers presented during the conference discussed whaling from its inception to its pinnacle, and ultimate decline. Much of the American

whaling fleet had disappeared by the onset of the 20th Century, but there was more to the story. During the First World War, approximately 58,000 whales were killed to provide the Allies with the animal’s oil that was essential for the new technologically advanced warfare. What remained of the whaling industry was dominated by the neutral Norway. Most of the whale population was to be found in the South Atlantic, waters that were largely controlled by the British Navy. Therefore, the British were able to rule and restrict the market for this vital commodity. A small residual American whaling fleet took advantage of this nascent demand, but it was a dangerous endeavor. German submarines were not a threat to whales, but could be a serious hazard for unsuspecting American whaleships. By denying the Central Powers access to whale oil, the Allies produced a shortage of fats in Germany and Austro-Hungary. Whale oil was used to make soap, but an important manufacturing by-product of the process was glycerin. Military explosives fall into two classifications: low or high explosives. Low explosives like gunpowder are mixtures of chemical ingredients that undergo rapid combustion and propel bullets and high-explosive shells. High explosives, however, are made from more unstable molecules that undergo explosive decomposition, producing precipitous pow-

erful shock waves. The essential different ingredient in high explosives is nitroglycerin, an unstable liquid that decomposes with explosive violence if heated or jarred. Nitroglycerin is made by reacting glycerol with concentrated nitric and sulfuric acids. Glycerol is present in animal and vegetable fats and particularly abundant in whale blubber; it was the key component of cordite used in the manufacture of military grade explosives. Whale oil was a thin, high-quality lubricant that prevented metal corrosion. Sperm whale oil is a pale-yellow liquid wax that makes it a particularly valuable lubricant. It remains liquid even at sub-zero temperatures, and, after treatment with sulfur, it becomes a A bottle of unrelubricant resistant to fined whale oil. extremely high pressures. It was ideal for the maintenance of rifles, marine chronometers, and intricate military instruments and machines.

Literal Computer Bug I just read the Autumn 2019 issue of Sea History and have to correct an error in an otherwise excellent issue. In Kathleen Broome Williams’s article on Grace Hopper (in “‘Amazing Grace’­—The Woman Who Brought the Navy into the Digital Age”), she erroneously attributes removing the moth from the Aiken Relay Calculator Mark II to RADM Hopper. In fact, the moth was removed from the Mark II (from Relay #70 Panel F to be exact) and taped in the logbook by a technician, William Burke. Burke and the logbook came to the Naval Proving Ground in Dahlgren, Virginia, (now the Naval Surface Warfare Center Dahlgren Division) along with the Mark II in March 1948. This is well documented in The Sound of Freedom by James P. Rife and Rodney P. Carlisle.