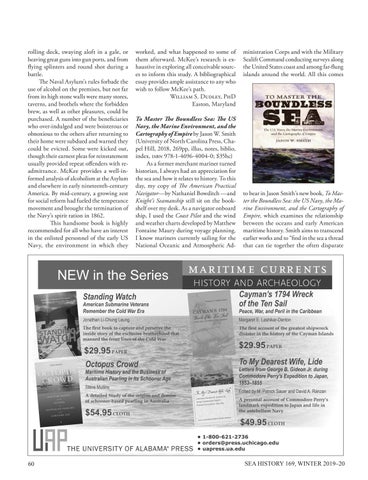 rolling deck, swaying aloft in a gale, or heaving great guns into gun ports, and from flying splinters and round shot during a battle. The Naval Asylum’s rules forbade the use of alcohol on the premises, but not far from its high stone walls were many stores, taverns, and brothels where the forbidden brew, as well as other pleasures, could be purchased. A number of the beneficiaries who over-indulged and were boisterous or obnoxious to the others after returning to their home were subdued and warned they could be evicted. Some were kicked out, though their earnest pleas for reinstatement usually provided repeat offenders with readmittance. McKee provides a well-informed analysis of alcoholism at the Asylum and elsewhere in early nineteenth-century America. By mid-century, a growing zest for social reform had fueled the temperance movement and brought the termination of the Navy’s spirit ration in 1862. This handsome book is highly recommended for all who have an interest in the enlisted personnel of the early US Navy, the environment in which they

worked, and what happened to some of them afterward. McKee’s research is exhaustive in exploring all conceivable sources to inform this study. A bibliographical essay provides ample assistance to any who wish to follow McKee’s path. William S. Dudley, PhD Easton, Maryland To Master The Boundless Sea: The US Navy, the Marine Environment, and the Cartography of Empire by Jason W. Smith (University of North Carolina Press, Chapel Hill, 2018, 269pp, illus, notes, biblio, index, isbn 978-1-4696-4004-0; $35hc) As a former merchant mariner turned historian, I always had an appreciation for the sea and how it relates to history. To this day, my copy of The American Practical Navigator—by Nathaniel Bowditch —and Knight’s Seamanship still sit on the bookshelf over my desk. As a navigator onboard ship, I used the Coast Pilot and the wind and weather charts developed by Matthew Fontaine Maury during voyage planning. I know mariners currently sailing for the National Oceanic and Atmospheric Ad-

ministration Corps and with the Military Sealift Command conducting surveys along the United States coast and among far-flung islands around the world. All this comes

to bear in Jason Smith’s new book, To Master the Boundless Sea: the US Navy, the Marine Environment, and the Cartography of Empire, which examines the relationship between the oceans and early American maritime history. Smith aims to transcend earlier works and to “find in the sea a thread that can tie together the often disparate

NEW in the Series Standing Watch

Peace, War, and Peril in the Caribbean