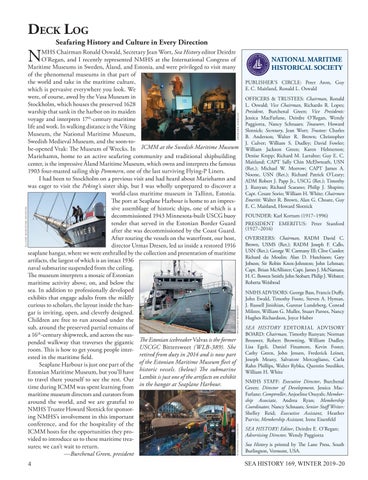 Seafaring History and Culture in Every Direction

MHS Chairman Ronald Oswald, Secretary Jean Wort, Sea History editor Deirdre O’Regan, and I recently represented NMHS at the International Congress of Maritime Museums in Sweden, Åland, and Estonia, and were privileged to visit many of the phenomenal museums in that part of the world and take in the maritime culture, which is pervasive everywhere you look. We were, of course, awed by the Vasa Museum in Stockholm, which houses the preserved 1628 warship that sank in the harbor on its maiden voyage and interprets 17th-century maritime life and work. In walking distance is the Viking Museum, the National Maritime Museum, Swedish Medieval Museum, and the soon-tobe-opened Vrak: The Museum of Wrecks. In ICMM at the Swedish Maritime Museum Mariehamn, home to an active seafaring community and traditional shipbuilding center, is the impressive Åland Maritime Museum, which owns and interprets the famous 1903 four-masted sailing ship Pommern, one of the last surviving Flying-P Liners. I had been to Stockholm on a previous visit and had heard about Mariehamn and was eager to visit the Peking’s sister ship, but I was wholly unprepared to discover a world-class maritime museum in Tallinn, Estonia. The port at Seaplane Harbour is home to an impressive assemblage of historic ships, one of which is a decommissioned 1943 Minnesota-built USCG buoy tender that served in the Estonian Border Guard after she was decommissioned by the Coast Guard. After touring the vessels on the waterfront, our host, director Urmas Dresen, led us inside a restored 1916 seaplane hangar, where we were enthralled by the collection and presentation of maritime artifacts, the largest of which is an intact 1936 naval submarine suspended from the ceiling. The museum interprets a mosaic of Estonian maritime activity above, on, and below the sea. In addition to professionally developed exhibits that engage adults from the mildly curious to scholars, the layout inside the hangar is inviting, open, and cleverly designed. Children are free to run around under the sub, around the preserved partial remains of a 16th-century shipwreck, and across the suspended walkway that traverses the gigantic The Estonian icebreaker Valvas is the former room. This is how to get young people inter- USCGC Bittersweet (WLB-389). She retired from duty in 2014 and is now part ested in the maritime field. Seaplane Harbour is just one part of the of the Estonian Maritime Museum fleet of Estonian Maritime Museum, but you’ll have historic vessels. (below) The submarine to travel there yourself to see the rest. Our Lembit is just one of the artifacts on exhibit time during ICMM was spent learning from in the hangar at Seaplane Harbour. maritime museum directors and curators from around the world, and we are grateful to NMHS Trustee Howard Slotnick for sponsoring NMHS’s involvement in this important conference, and for the hospitality of the ICMM hosts for the opportunities they provided to introduce us to these maritime treasures; we can’t wait to return. —Burchenal Green, president 4