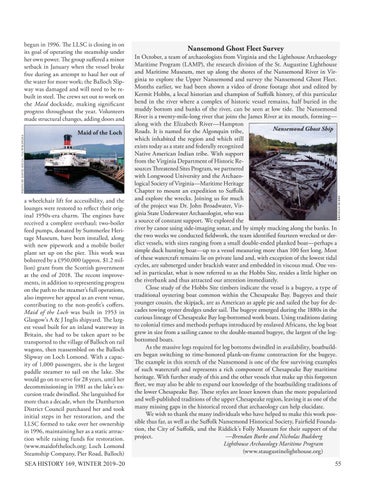 Maid of the Loch

a wheelchair lift for accessibility, and the lounges were restored to reflect their original 1950s-era charm. The engines have received a complete overhaul; two-boiler feed pumps, donated by Summerlee Heritage Museum, have been installed, along with new pipework and a mobile boiler plant set up on the pier. This work was bolstered by a £950,000 (approx. $1.2 million) grant from the Scottish government at the end of 2018. The recent improvements, in addition to representing progress on the path to the steamer’s full operations, also improve her appeal as an event venue, contributing to the non-profit’s coffers. Maid of the Loch was built in 1953 in Glasgow’s A & J Inglis shipyard. The largest vessel built for an inland waterway in Britain, she had to be taken apart to be transported to the village of Balloch on rail wagons, then reassembled on the Balloch Slipway on Loch Lomond. With a capacity of 1,000 passengers, she is the largest paddle steamer to sail on the lake. She would go on to serve for 28 years, until her decommissioning in 1981 as the lake’s excursion trade dwindled. She languished for more than a decade, when the Dumbarton District Council purchased her and took initial steps in her restoration, and the LLSC formed to take over her ownership in 1996, maintaining her as a static attraction while raising funds for restoration. (www.maidoftheloch.org; Loch Lomond Steamship Company, Pier Road, Balloch)

Nansemond Ghost Fleet Survey In October, a team of archaeologists from Virginia and the Lighthouse Archaeology Maritime Program (LAMP), the research division of the St. Augustine Lighthouse and Maritime Museum, met up along the shores of the Nansemond River in Virginia to explore the Upper Nansemond and survey the Nansemond Ghost Fleet. Months earlier, we had been shown a video of drone footage shot and edited by Kermit Hobbs, a local historian and champion of Suffolk history, of this particular bend in the river where a complex of historic vessel remains, half buried in the muddy bottom and banks of the river, can be seen at low tide. The Nansemond River is a twenty-mile-long river that joins the James River at its mouth, forming— along with the Elizabeth River—Hampton Nansemond Ghost Ship Roads. It is named for the Algonquin tribe, which inhabited the region and which still exists today as a state and federally recognized Native American Indian tribe. With support from the Virginia Department of Historic Resources Threatened Sites Program, we partnered with Longwood University and the Archaeological Society of Virginia—Maritime Heritage Chapter to mount an expedition to Suffolk and explore the wrecks. Joining us for much of the project was Dr. John Broadwater, Virginia State Underwater Archaeologist, who was a source of constant support. We explored the river by canoe using side-imaging sonar, and by simply mucking along the banks. In the two weeks we conducted fieldwork, the team identified fourteen wrecked or derelict vessels, with sizes ranging from a small double-ended planked boat—perhaps a simple duck hunting boat—up to a vessel measuring more than 100 feet long. Most of these watercraft remains lie on private land and, with exception of the lowest tidal cycles, are submerged under brackish water and embedded in viscous mud. One vessel in particular, what is now referred to as the Hobbs Site, resides a little higher on the riverbank and thus attracted our attention immediately. Close study of the Hobbs Site timbers indicate the vessel is a bugeye, a type of traditional oystering boat common within the Chesapeake Bay. Bugeyes and their younger cousin, the skipjack, are as American as apple pie and sailed the bay for decades towing oyster dredges under sail. The bugeye emerged during the 1880s in the curious lineage of Chesapeake Bay log-bottomed work boats. Using traditions dating to colonial times and methods perhaps introduced by enslaved Africans, the log boat grew in size from a sailing canoe to the double-masted bugeye, the largest of the logbottomed boats. As the massive logs required for log bottoms dwindled in availability, boatbuilders began switching to time-honored plank-on-frame construction for the bugeye. The example in this stretch of the Nansemond is one of the few surviving examples of such watercraft and represents a rich component of Chesapeake Bay maritime heritage. With further study of this and the other vessels that make up this forgotten fleet, we may also be able to expand our knowledge of the boatbuilding traditions of the lower Chesapeake Bay. These styles are lesser known than the more popularized and well-published traditions of the upper Chesapeake region, leaving it as one of the many missing gaps in the historical record that archaeology can help elucidate. We wish to thank the many individuals who have helped to make this work possible thus far, as well as the Suffolk Nansemond Historical Society, Fairfield Foundation, the City of Suffolk, and the Riddick’s Folly Museum for their support of the project. —Brendan Burke and Nicholas Budsberg Lighthouse Archaeology Maritime Program (www.staugustinelighthouse.org)

photo by david souza, via wikipedia

begun in 1996. The LLSC is closing in on its goal of operating the steamship under her own power. The group suffered a minor setback in January when the vessel broke free during an attempt to haul her out of the water for more work; the Balloch Slipway was damaged and will need to be rebuilt in steel. The crews set out to work on the Maid dockside, making significant progress throughout the year. Volunteers made structural changes, adding doors and