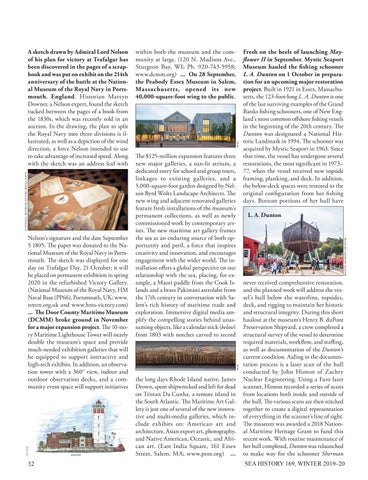 The $125-million expansion features three new major galleries, a sun-lit atrium, a dedicated entry for school and group tours, linkages to existing galleries, and a 5,000-square-foot garden designed by Nelson Byrd Woltz Landscape Architects. The new wing and adjacent renovated galleries feature fresh installations of the museum’s permanent collections, as well as newly commissioned work by contemporary artists. The new maritime art gallery frames the sea as an enduring source of both opportunity and peril, a force that inspires creativity and innovation, and encourages engagement with the wider world. The installation offers a global perspective on our relationship with the sea, placing, for example, a Maori paddle from the Cook Islands and a brass Pakistani astrolabe from the 17th century in conversation with Salem’s rich history of maritime trade and exploration. Immersive digital media amplify the compelling stories behind unassuming objects, like a calendar stick (below) from 1803 with notches carved to record

Fresh on the heels of launching Mayflower II in September, Mystic Seaport Museum hauled the fishing schooner L. A. Dunton on 1 October in preparation for an upcoming major restoration project. Built in 1921 in Essex, Massachusetts, the 123-foot-long L. A. Dunton is one of the last surviving examples of the Grand Banks fishing schooners, one of New England’s most common offshore fishing vessels in the beginning of the 20th century. The Dunton was designated a National Historic Landmark in 1994. The schooner was acquired by Mystic Seaport in 1963. Since that time, the vessel has undergone several restorations, the most significant in 1973– 77, when the vessel received new topside framing, planking, and deck. In addition, the below-deck spaces were restored to the original configuration from her fishing days. Bottom portions of her hull have L. A. Dunton

Nelson’s signature and the date September 5 1805. The paper was donated to the National Museum of the Royal Navy in Portsmouth. The sketch was displayed for one day on Trafalgar Day, 21 October; it will be placed on permanent exhibition in spring 2020 in the refurbished Victory Gallery. (National Museum of the Royal Navy, HM Naval Base (PP66), Portsmouth, UK; www. nmrn.org.uk and www.hms-victory.com) ... The Door County Maritime Museum (DCMM) broke ground in November for a major expansion project. The 10-story Maritime Lighthouse Tower will nearly double the museum’s space and provide much-needed exhibition galleries that will be equipped to support interactive and high-tech exhibits. In addition, an observation tower with a 360° view, indoor and outdoor observation decks, and a community event space will support initiatives

national museum of the royal navy

A sketch drawn by Admiral Lord Nelson of his plan for victory at Trafalgar has been discovered in the pages of a scrapbook and was put on exhibit on the 214th anniversary of the battle at the National Museum of the Royal Navy in Portsmouth, England. Historian Martyn Downer, a Nelson expert, found the sketch tucked between the pages of a book from the 1830s, which was recently sold in an auction. In the drawing, the plan to split the Royal Navy into three divisions is illustrated, as well as a depiction of the wind direction, a force Nelson intended to use to take advantage of increased speed. Along with the sketch was an address leaf with

never received comprehensive restoration, and the planned work will address the vessel’s hull below the waterline, topsides, deck, and rigging to maintain her historic and structural integrity. During this short haulout at the museum’s Henry B. duPont Preservation Shipyard, a crew completed a structural survey of the vessel to determine required materials, workflow, and staffing, as well as documentation of the Dunton’s current condition. Aiding in the documentation process is a laser scan of the hull conducted by John Hinton of Zachry Nuclear Engineering. Using a Faro laser scanner, Hinton recorded a series of scans from locations both inside and outside of the hull. The various scans are then stitched together to create a digital representation of everything in the scanner’s line of sight. The museum was awarded a 2018 National Maritime Heritage Grant to fund this recent work. With routine maintenance of her hull completed, Dunton was relaunched to make way for the schooner Sherman SEA HISTORY 169, WINTER 2019–20