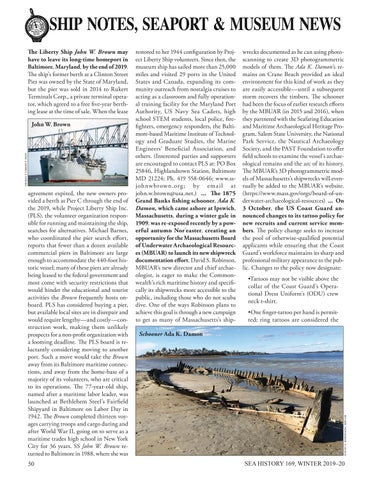 agreement expired, the new owners provided a berth at Pier C through the end of the 2019, while Project Liberty Ship Inc. (PLS), the volunteer organization responsible for running and maintaining the ship, searches for alternatives. Michael Barnes, who coordinated the pier search effort, reports that fewer than a dozen available commercial piers in Baltimore are large enough to accommodate the 440-foot historic vessel; many of these piers are already being leased to the federal government and most come with security restrictions that would hinder the educational and tourist activities the Brown frequently hosts onboard. PLS has considered buying a pier, but available local sites are in disrepair and would require lengthy—and costly—construction work, making them unlikely prospects for a non-profit organization with a looming deadline. The PLS board is reluctantly considering moving to another port. Such a move would take the Brown away from its Baltimore maritime connections, and away from the home-base of a majority of its volunteers, who are critical to its operations. The 77-year-old ship, named after a maritime labor leader, was launched at Bethlehem Steel’s Fairfield Shipyard in Baltimore on Labor Day in 1942. The Brown completed thirteen voyages carrying troops and cargo during and after World War II, going on to serve as a maritime trades high school in New York City for 36 years. SS John W. Brown returned to Baltimore in 1988, where she was 50

restored to her 1944 configuration by Project Liberty Ship volunteers. Since then, the museum ship has sailed more than 25,000 miles and visited 29 ports in the United States and Canada, expanding its community outreach from nostalgia cruises to acting as a classroom and fully operational training facility for the Maryland Port Authority, US Navy Sea Cadets, high school STEM students, local police, firefighters, emergency responders, the Baltimore-based Maritime Institute of Technology and Graduate Studies, the Marine Engineers’ Beneficial Association, and others. (Interested parties and supporters are encouraged to contact PLS at: PO Box 25846, Highlandtown Station, Baltimore MD 21224; Ph. 419 558-0646; www.ssjohnwbrown.org; by ema il at john.w.brown@usa.net.) ... The 1875 Grand Banks fishing schooner, Ada K. Damon, which came ashore at Ipswich, Massachusetts, during a winter gale in 1909, was re-exposed recently by a powerful autumn Nor’easter, creating an opportunity for the Massachusetts Board of Underwater Archaeological Resources (MBUAR) to launch its new shipwreck documentation effort. David S. Robinson, MBUAR’s new director and chief archaeologist, is eager to make the Commonwealth’s rich maritime history and specifically its shipwrecks more accessible to the public, including those who do not scuba dive. One of the ways Robinson plans to achieve this goal is through a new campaign to get as many of Massachusetts’s ship-

wrecks documented as he can using photoscanning to create 3D photogrammetric models of them. The Ada K. Damon’s remains on Crane Beach provided an ideal environment for this kind of work as they are easily accessible­—until a subsequent storm recovers the timbers. The schooner had been the focus of earlier research efforts by the MBUAR (in 2015 and 2016), when they partnered with the Seafaring Education and Maritime Archaeological Heritage Program, Salem State University, the National Park Service, the Nautical Archaeology Society, and the PAST Foundation to offer field schools to examine the vessel’s archaeological remains and the arc of its history. The MBUAR’s 3D photogrammetric models of Massachusetts’s shipwrecks will eventually be added to the MBUAR’s website. (https://www.mass.gov/orgs/board-of-underwater-archaeological-resources) ... On 3 October, the US Coast Guard announced changes to its tattoo policy for new recruits and current service members. The policy change seeks to increase the pool of otherwise-qualified potential applicants while ensuring that the Coast Guard’s workforce maintains its sharp and professional military appearance to the public. Changes to the policy now designate: •Tattoos may not be visible above the collar of the Coast Guard’s Operational Dress Uniform’s (ODU) crew neck t-shirt. •One finger-tattoo per hand is permitted; ring tattoos are considered the

The Liberty Ship John W. Brown may have to leave its long-time homeport in Baltimore, Maryland, by the end of 2019. The ship’s former berth at a Clinton Street Pier was owned by the State of Maryland, but the pier was sold in 2014 to Rukert Terminals Corp., a private terminal operator, which agreed to a free five-year berthing lease at the time of sale. When the lease