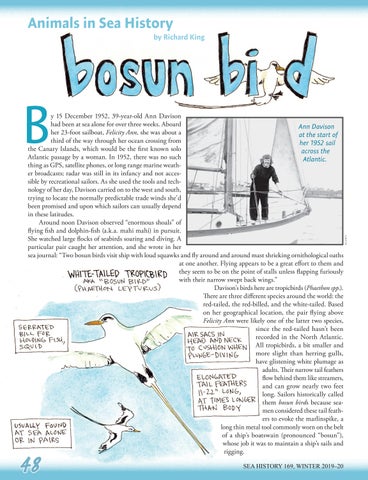 y 15 December 1952, 39-year-old Ann Davison had been at sea alone for over three weeks. Aboard Ann Davison her 23-foot sailboat, Felicity Ann, she was about a at the start of third of the way through her ocean crossing from her 1952 sail the Canary Islands, which would be the first known solo across the Atlantic passage by a woman. In 1952, there was no such Atlantic. thing as GPS, satellite phones, or long range marine weather broadcasts; radar was still in its infancy and not accessible by recreational sailors. As she used the tools and technology of her day, Davison carried on to the west and south, trying to locate the normally predictable trade winds she’d been promised and upon which sailors can usually depend in these latitudes. Around noon Davison observed “enormous shoals” of flying fish and dolphin-fish (a.k.a. mahi mahi) in pursuit. She watched large flocks of seabirds soaring and diving. A particular pair caught her attention, and she wrote in her sea journal: “Two bosun birds visit ship with loud squawks and fly around and around mast shrieking ornithological oaths at one another. Flying appears to be a great effort to them and they seem to be on the point of stalls unless flapping furiously with their narrow swept back wings.” Davison’s birds here are tropicbirds (Phaethon spp.). There are three different species around the world: the red-tailed, the red-billed, and the white-tailed. Based on her geographical location, the pair flying above Felicity Ann were likely one of the latter two species, since the red-tailed hasn’t been recorded in the North Atlantic. All tropicbirds, a bit smaller and more slight than herring gulls, have glistening white plumage as adults. Their narrow tail feathers flow behind them like streamers, and can grow nearly two feet long. Sailors historically called them bosun birds because seamen considered these tail feathers to evoke the marlinspike, a long thin metal tool commonly worn on the belt of a ship’s boatswain (pronounced “bosun”), whose job it was to maintain a ship’s sails and rigging.