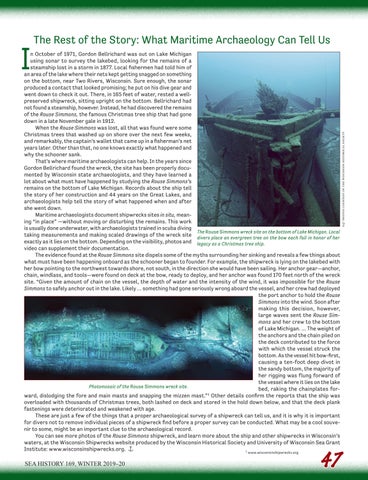 n October of 1971, Gordon Bellrichard was out on Lake Michigan using sonar to survey the lakebed, looking for the remains of a steamship lost in a storm in 1877. Local fishermen had told him of an area of the lake where their nets kept getting snagged on something on the bottom, near Two Rivers, Wisconsin. Sure enough, the sonar produced a contact that looked promising; he put on his dive gear and went down to check it out. There, in 165 feet of water, rested a wellpreserved shipwreck, sitting upright on the bottom. Bellrichard had not found a steamship, however. Instead, he had discovered the remains of the Rouse Simmons, the famous Christmas tree ship that had gone down in a late November gale in 1912. When the Rouse Simmons was lost, all that was found were some Christmas trees that washed up on shore over the next few weeks, and remarkably, the captain’s wallet that came up in a fisherman’s net years later. Other than that, no one knows exactly what happened and why the schooner sank. That’s where maritime archaeologists can help. In the years since Gordon Bellrichard found the wreck, the site has been properly documented by Wisconsin state archaeologists, and they have learned a lot about what must have happened by studying the Rouse Simmons’s remains on the bottom of Lake Michigan. Records about the ship tell the story of her construction and 44 years on the Great Lakes, and archaeologists help tell the story of what happened when and after she went down. Maritime archaeologists document shipwrecks sites in situ, meaning “in place” —without moving or disturbing the remains. This work is usually done underwater, with archaeologists trained in scuba diving The Rouse Simmons wreck site on the bottom of Lake Michigan. Local taking measurements and making scaled drawings of the wreck site divers place an evergreen tree on the bow each fall in honor of her exactly as it lies on the bottom. Depending on the visibility, photos and legacy as a Christmas tree ship. video can supplement their documentation. The evidence found at the Rouse Simmons site dispels some of the myths surrounding her sinking and reveals a few things about what must have been happening onboard as the schooner began to founder. For example, the shipwreck is lying on the lakebed with her bow pointing to the northwest towards shore, not south, in the direction she would have been sailing. Her anchor gear—anchor, chain, windlass, and tools—were found on deck at the bow, ready to deploy, and her anchor was found 170 feet north of the wreck site. “Given the amount of chain on the vessel, the depth of water and the intensity of the wind, it was impossible for the Rouse Simmons to safely anchor out in the lake. Likely … something had gone seriously wrong aboard the vessel, and her crew had deployed the port anchor to hold the Rouse Simmons into the wind. Soon after making this decision, however, large waves sent the Rouse Simmons and her crew to the bottom of Lake Michigan. … The weight of the anchors and the chain piled on the deck contributed to the force with which the vessel struck the bottom. As the vessel hit bow-first, causing a ten-foot deep divot in the sandy bottom, the majority of her rigging was flung forward of the vessel where it lies on the lake Photomosaic of the Rouse Simmons wreck site. bed, raking the chainplates forward, dislodging the fore and main masts and snapping the mizzen mast.” 1 Other details confirm the reports that the ship was overloaded with thousands of Christmas trees, both lashed on deck and stored in the hold down below, and that the deck plank fastenings were deteriorated and weakened with age. These are just a few of the things that a proper archaeological survey of a shipwreck can tell us, and it is why it is important for divers not to remove individual pieces of a shipwreck find before a proper survey can be conducted. What may be a cool souvenir to some, might be an important clue to the archaeological record. You can see more photos of the Rouse Simmons shipwreck, and learn more about the ship and other shipwrecks in Wisconsin’s waters, at the Wisconsin Shipwrecks website produced by the Wisconsin Historical Society and University of Wisconsin Sea Grant Institute: www.wisconsinshipwrecks.org. 1  www.wisconsinshipwrecks.org

The Rest of the Story: What Maritime Archaeology Can Tell Us