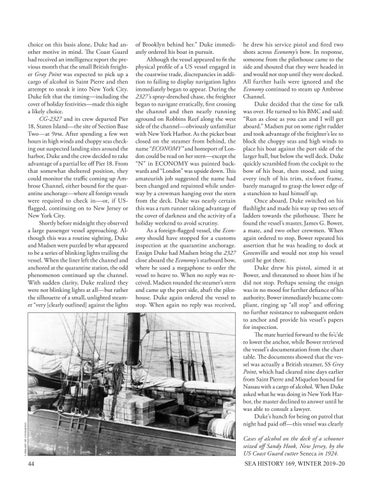 choice on this basis alone, Duke had another motive in mind. The Coast Guard had received an intelligence report the previous month that the small British freighter Gray Point was expected to pick up a cargo of alcohol in Saint Pierre and then attempt to sneak it into New York City. Duke felt that the timing—including the cover of holiday festivities—made this night a likely choice. CG-2327 and its crew departed Pier 18, Staten Island—the site of Section Base Two—at 9pm. After spending a few wet hours in high winds and choppy seas checking out suspected landing sites around the harbor, Duke and the crew decided to take advantage of a partial lee off Pier 18. From that somewhat sheltered position, they could monitor the traffic coming up Ambrose Channel, either bound for the quarantine anchorage—where all foreign vessels were required to check in—or, if USflagged, continuing on to New Jersey or New York City. Shortly before midnight they observed a large passenger vessel approaching. Although this was a routine sighting, Duke and Madsen were puzzled by what appeared to be a series of blinking lights trailing the vessel. When the liner left the channel and anchored at the quarantine station, the odd phenomenon continued up the channel. With sudden clarity, Duke realized they were not blinking lights at all—but rather the silhouette of a small, unlighted steamer “very [clearly outlined] against the lights

of Brooklyn behind her.” Duke immediately ordered his boat in pursuit. Although the vessel appeared to fit the physical profile of a US vessel engaged in the coastwise trade, discrepancies in addition to failing to display navigation lights immediately began to appear. During the 2327’s spray-drenched chase, the freighter began to navigate erratically, first crossing the channel and then nearly running aground on Robbins Reef along the west side of the channel—obviously unfamiliar with New York Harbor. As the picket boat closed on the steamer from behind, the name “ECONOMY” and homeport of London could be read on her stern—except the “N” in ECONOMY was painted backwards and “London” was upside down. This amateurish job suggested the name had been changed and repainted while underway by a crewman hanging over the stern from the deck. Duke was nearly certain this was a rum runner taking advantage of the cover of darkness and the activity of a holiday weekend to avoid scrutiny. As a foreign-flagged vessel, the Economy should have stopped for a customs inspection at the quarantine anchorage. Ensign Duke had Madsen bring the 2327 close aboard the Economy’s starboard bow, where he used a megaphone to order the vessel to heave to. When no reply was received, Madsen rounded the steamer’s stern and came up the port side, abaft the pilothouse. Duke again ordered the vessel to stop. When again no reply was received,

he drew his service pistol and fired two shots across Economy’s bow. In response, someone from the pilothouse came to the side and shouted that they were headed in and would not stop until they were docked. All further hails were ignored and the Economy continued to steam up Ambrose Channel. Duke decided that the time for talk was over. He turned to his BMC and said: “Run as close as you can and I will get aboard.” Madsen put on some right rudder and took advantage of the freighter’s lee to block the choppy seas and high winds to place his boat against the port side of the larger hull, but below the well deck. Duke quickly scrambled from the cockpit to the bow of his boat, then stood, and using every inch of his trim, six-foot frame, barely managed to grasp the lower edge of a stanchion to haul himself up. Once aboard, Duke switched on his flashlight and made his way up two sets of ladders towards the pilothouse. There he found the vessel’s master, James G. Bower, a mate, and two other crewmen. When again ordered to stop, Bower repeated his assertion that he was heading to dock at Greenville and would not stop his vessel until he got there. Duke drew his pistol, aimed it at Bower, and threatened to shoot him if he did not stop. Perhaps sensing the ensign was in no mood for further defiance of his authority, Bower immediately became compliant, ringing up “all stop” and offering no further resistance to subsequent orders to anchor and provide his vessel’s papers for inspection. The mate hurried forward to the fo’c’sle to lower the anchor, while Bower retrieved the vessel’s documentation from the chart table. The documents showed that the vessel was actually a British steamer, SS Grey Point, which had cleared nine days earlier from Saint Pierre and Miquelon bound for Nassau with a cargo of alcohol. When Duke asked what he was doing in New York Harbor, the master declined to answer until he was able to consult a lawyer. Duke’s hunch for being on patrol that night had paid off—this vessel was clearly Cases of alcohol on the deck of a schooner seized off Sandy Hook, New Jersey, by the US Coast Guard cutter Seneca in 1924.