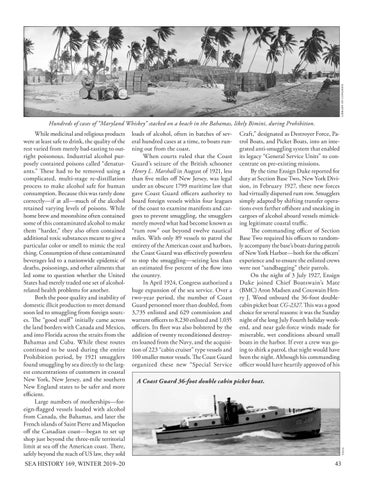 Hundreds of cases of “Maryland Whiskey” stacked on a beach in the Bahamas, likely Bimini, during Prohibition. loads of alcohol, often in batches of several hundred cases at a time, to boats running out from the coast. When courts ruled that the Coast Guard’s seizure of the British schooner Henry L. Marshall in August of 1921, less than five miles off New Jersey, was legal under an obscure 1799 maritime law that gave Coast Guard officers authority to board foreign vessels within four leagues of the coast to examine manifests and cargoes to prevent smuggling, the smugglers merely moved what had become known as “rum row” out beyond twelve nautical miles. With only 89 vessels to patrol the entirety of the American coast and harbors, the Coast Guard was effectively powerless to stop the smuggling—seizing less than an estimated five percent of the flow into the country. In April 1924, Congress authorized a huge expansion of the sea service. Over a two-year period, the number of Coast Guard personnel more than doubled, from 3,735 enlisted and 629 commission and warrant officers to 8,230 enlisted and 1,035 officers. Its fleet was also bolstered by the addition of twenty reconditioned destroyers loaned from the Navy, and the acquisition of 223 “cabin cruiser” type vessels and 100 smaller motor vessels. The Coast Guard organized these new “Special Service

Craft,” designated as Destroyer Force, Patrol Boats, and Picket Boats, into an integrated anti-smuggling system that enabled its legacy “General Service Units” to concentrate on pre-existing missions. By the time Ensign Duke reported for duty at Section Base Two, New York Division, in February 1927, these new forces had virtually dispersed rum row. Smugglers simply adapted by shifting transfer operations even farther offshore and sneaking in cargoes of alcohol aboard vessels mimicking legitimate coastal traffic. The commanding officer of Section Base Two required his officers to randomly accompany the base’s boats during patrols of New York Harbor—both for the officers’ experience and to ensure the enlisted crews were not “sandbagging” their patrols. On the night of 3 July 1927, Ensign Duke joined Chief Boatswain’s Mate (BMC) Aron Madsen and Coxswain Henry J. Wood onboard the 36-foot doublecabin picket boat CG-2327. This was a good choice for several reasons: it was the Sunday night of the long July Fourth holiday weekend, and near gale-force winds made for miserable, wet conditions aboard small boats in the harbor. If ever a crew was going to shirk a patrol, that night would have been the night. Although his commanding officer would have heartily approved of his

While medicinal and religious products were at least safe to drink, the quality of the rest varied from merely bad-tasting to outright poisonous. Industrial alcohol purposely contained poisons called “denaturants.” These had to be removed using a complicated, multi-stage re-distillation process to make alcohol safe for human consumption. Because this was rarely done correctly—if at all—much of the alcohol retained varying levels of poisons. While home brew and moonshine often contained some of this contaminated alcohol to make them “harder,” they also often contained additional toxic substances meant to give a particular color or smell to mimic the real thing. Consumption of these contaminated beverages led to a nationwide epidemic of deaths, poisonings, and other ailments that led some to question whether the United States had merely traded one set of alcoholrelated health problems for another. Both the poor quality and inability of domestic illicit production to meet demand soon led to smuggling from foreign sources. The “good stuff” initially came across the land borders with Canada and Mexico, and into Florida across the straits from the Bahamas and Cuba. While these routes continued to be used during the entire Prohibition period, by 1921 smugglers found smuggling by sea directly to the largest concentrations of customers in coastal New York, New Jersey, and the southern New England states to be safer and more efficient. Large numbers of motherships—foreign-flagged vessels loaded with alcohol from Canada, the Bahamas, and later the French islands of Saint Pierre and Miquelon off the Canadian coast—began to set up shop just beyond the three-mile territorial limit at sea off the American coast. There, safely beyond the reach of US law, they sold