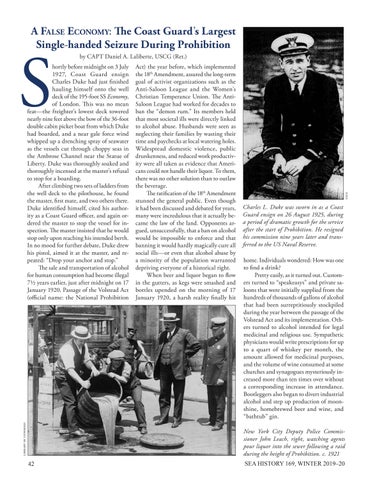 hortly before midnight on 3 July 1927, Coast Guard ensign Charles Duke had just finished hauling himself onto the well deck of the 195-foot SS Economy, of London. This was no mean feat—the freighter’s lowest deck towered nearly nine feet above the bow of the 36-foot double cabin picket boat from which Duke had boarded, and a near gale force wind whipped up a drenching spray of seawater as the vessels cut through choppy seas in the Ambrose Channel near the Statue of Liberty. Duke was thoroughly soaked and thoroughly incensed at the master’s refusal to stop for a boarding. After climbing two sets of ladders from the well deck to the pilothouse, he found the master, first mate, and two others there. Duke identified himself, cited his authority as a Coast Guard officer, and again ordered the master to stop the vessel for inspection. The master insisted that he would stop only upon reaching his intended berth. In no mood for further debate, Duke drew his pistol, aimed it at the master, and repeated: “Drop your anchor and stop.” The sale and transportation of alcohol for human consumption had become illegal 7 ½ years earlier, just after midnight on 17 January 1920. Passage of the Volstead Act (official name: the National Prohibition

Act) the year before, which implemented the 18th Amendment, assured the long-term goal of activist organizations such as the Anti-Saloon League and the Women’s Christian Temperance Union. The AntiSaloon League had worked for decades to ban the “demon rum.” Its members held that most societal ills were directly linked to alcohol abuse. Husbands were seen as neglecting their families by wasting their time and paychecks at local watering holes. Widespread domestic violence, public drunkenness, and reduced work productivity were all taken as evidence that Americans could not handle their liquor. To them, there was no other solution than to outlaw the beverage. The ratification of the 18th Amendment stunned the general public. Even though it had been discussed and debated for years, many were incredulous that it actually became the law of the land. Opponents argued, unsuccessfully, that a ban on alcohol would be impossible to enforce and that banning it would hardly magically cure all social ills—or even that alcohol abuse by a minority of the population warranted depriving everyone of a historical right. When beer and liquor began to flow in the gutters, as kegs were smashed and bottles upended on the morning of 17 January 1920, a harsh reality finally hit

Charles L. Duke was sworn in as a Coast Guard ensign on 26 August 1925, during a period of dramatic growth for the service after the start of Prohibition. He resigned his commission nine years later and transferred to the US Naval Reserve. home. Individuals wondered: How was one to find a drink? Pretty easily, as it turned out. Customers turned to “speakeasys” and private saloons that were initially supplied from the hundreds of thousands of gallons of alcohol that had been surreptitiously stockpiled during the year between the passage of the Volstead Act and its implementation. Others turned to alcohol intended for legal medicinal and religious use. Sympathetic physicians would write prescriptions for up to a quart of whiskey per month, the amount allowed for medicinal purposes, and the volume of wine consumed at some churches and synagogues mysteriously increased more than ten times over without a corresponding increase in attendance. Bootleggers also began to divert industrial alcohol and step up production of moonshine, homebrewed beer and wine, and “bathtub” gin. New York City Deputy Police Commissioner John Leach, right, watching agents pour liquor into the sewer following a raid during the height of Prohibition. c. 1921