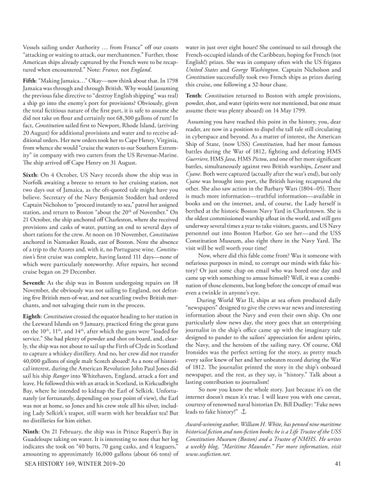 Vessels sailing under Authority … from France” off our coasts “attacking or waiting to attack, our merchantmen.” Further, those American ships already captured by the French were to be recaptured when encountered.” Note: France, not England. Fifth: “Making Jamaica…” Okay—now think about that. In 1798 Jamaica was through and through British. Why would (assuming the previous false directive to “destroy English shipping” was real) a ship go into the enemy’s port for provisions? Obviously, given the total fictitious nature of the first part, it is safe to assume she did not take on flour and certainly not 68,300 gallons of rum! In fact, Constitution sailed first to Newport, Rhode Island, (arriving 20 August) for additional provisions and water and to receive additional orders. Her new orders took her to Cape Henry, Virginia, from whence she would “cruise the waters to our Southern Extremity” in company with two cutters from the US Revenue-Marine. The ship arrived off Cape Henry on 31 August. Sixth: On 4 October, US Navy records show the ship was in Norfolk awaiting a breeze to return to her cruising station, not two days out of Jamaica, as the oft-quoted tale might have you believe. Secretary of the Navy Benjamin Stoddert had ordered Captain Nicholson to “proceed instantly to sea,” patrol her assigned station, and return to Boston “about the 20th of November.” On 21 October, the ship anchored off Charleston, where she received provisions and casks of water, putting an end to several days of short rations for the crew. At noon on 10 November, Constitution anchored in Nantasket Roads, east of Boston. Note the absence of a trip to the Azores and, with it, no Portuguese wine. Constitution’s first cruise was complete, having lasted 111 days—none of which were particularly noteworthy. After repairs, her second cruise began on 29 December. Seventh: As the ship was in Boston undergoing repairs on 18 November, she obviously was not sailing to England, not defeating five British men-of-war, and not scuttling twelve British merchants, and not salvaging their rum in the process. Eighth: Constitution crossed the equator heading to her station in the Leeward Islands on 9 January, practiced firing the great guns on the 10th, 11th, and 14th, after which the guns were “loaded for service.” She had plenty of powder and shot on board, and, clearly, the ship was not about to sail up the Firth of Clyde in Scotland to capture a whiskey distillery. And no, her crew did not transfer 40,000 gallons of single malt Scotch aboard! As a note of historical interest, during the American Revolution John Paul Jones did sail his ship Ranger into Whitehaven, England, attack a fort and leave. He followed this with an attack in Scotland, in Kirkcudbright Bay, where he intended to kidnap the Earl of Selkirk. Unfortunately (or fortunately, depending on your point of view), the Earl was not at home, so Jones and his crew stole all his silver, including Lady Selkirk’s teapot, still warm with her breakfast tea! But no distilleries for him either. Ninth: On 21 February, the ship was in Prince Rupert’s Bay in Guadeloupe taking on water. It is interesting to note that her log indicates she took on “40 butts, 70 gang casks, and 4 leaguers,” amounting to approximately 16,000 gallons (about 66 tons) of

water in just over eight hours! She continued to sail through the French-occupied islands of the Caribbean, hoping for French (not English!) prizes. She was in company often with the US frigates United States and George Washington. Captain Nicholson and Constitution successfully took two French ships as prizes during this cruise, one following a 32-hour chase. Tenth: Constitution returned to Boston with ample provisions, powder, shot, and water (spirits were not mentioned, but one must assume there was plenty aboard) on 14 May 1799. Assuming you have reached this point in the history, you, dear reader, are now in a position to dispel the tall tale still circulating in cyberspace and beyond. As a matter of interest, the American Ship of State, (now USS) Constitution, had her most famous battles during the War of 1812, fighting and defeating HMS Guerriere, HMS Java, HMS Pictou, and one of her more significant battles, simultaneously against two British warships, Levant and Cyane. Both were captured (actually after the war’s end), but only Cyane was brought into port, the British having recaptured the other. She also saw action in the Barbary Wars (1804–05). There is much more information—truthful information—available in books and on the internet, and, of course, the Lady herself is berthed at the historic Boston Navy Yard in Charlestown. She is the oldest commissioned warship afloat in the world, and still gets underway several times a year to take visitors, guests, and US Navy personnel out into Boston Harbor. Go see her—and the USS Constitution Museum, also right there in the Navy Yard. The visit will be well worth your time! Now, where did this fable come from? Was it someone with nefarious purposes in mind, to corrupt our minds with fake history? Or just some chap on email who was bored one day and came up with something to amuse himself? Well, it was a combination of those elements, but long before the concept of email was even a twinkle in anyone’s eye. During World War II, ships at sea often produced daily “newspapers” designed to give the crews war news and interesting information about the Navy and even their own ship. On one particularly slow news day, the story goes that an enterprising journalist in the ship’s office came up with the imaginary tale designed to pander to the sailors’ appreciation for ardent spirits, the Navy, and the heroism of the sailing navy. Of course, Old Ironsides was the perfect setting for the story, as pretty much every sailor knew of her and her unbeaten record during the War of 1812. The journalist printed the story in the ship’s onboard newspaper, and the rest, as they say, is “history.” Talk about a lasting contribution to journalism! So now you know the whole story. Just because it’s on the internet doesn’t mean it’s true. I will leave you with one caveat, courtesy of renowned naval historian Dr. Bill Dudley: “Fake news leads to fake history!” Award-winning author, William H. White, has penned nine maritime historical fiction and non-fiction books; he is a Life Trustee of the USS Constitution Museum (Boston) and a Trustee of NMHS. He writes a weekly blog, “Maritime Maunder.” For more information, visit www.seafiction.net.