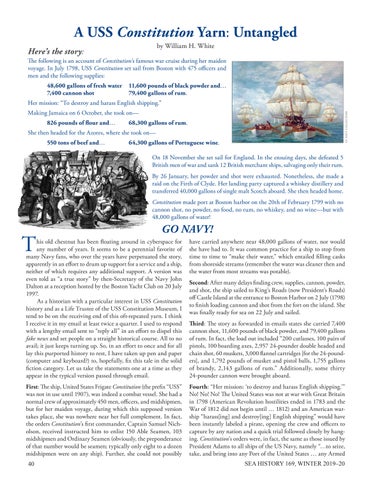 The following is an account of Constitution’s famous war cruise during her maiden voyage. In July 1798, USS Constitution set sail from Boston with 475 officers and men and the following supplies:

Her mission: “To destroy and harass English shipping.”

She then headed for the Azores, where she took on—

64,300 gallons of Portuguese wine. On 18 November she set sail for England. In the ensuing days, she defeated 5 British men of war and sank 12 British merchant ships, salvaging only their rum. By 26 January, her powder and shot were exhausted. Nonetheless, she made a raid on the Firth of Clyde. Her landing party captured a whiskey distillery and transferred 40,000 gallons of single malt Scotch aboard. She then headed home. Constitution made port at Boston harbor on the 20th of February 1799 with no cannon shot, no powder, no food, no rum, no whiskey, and no wine—but with 48,000 gallons of water!

his old chestnut has been floating around in cyberspace for any number of years. It seems to be a perennial favorite of many Navy fans, who over the years have perpetuated the story, apparently in an effort to drum up support for a service and a ship, neither of which requires any additional support. A version was even told as “a true story” by then-Secretary of the Navy John Dalton at a reception hosted by the Boston Yacht Club on 20 July 1997. As a historian with a particular interest in USS Constitution history and as a Life Trustee of the USS Constitution Museum, I tend to be on the receiving end of this oft-repeated yarn. I think I receive it in my email at least twice a quarter. I used to respond with a lengthy email sent to “reply all” in an effort to dispel this fake news and set people on a straight historical course. All to no avail; it just keeps turning up. So, in an effort to once and for all lay this purported history to rest, I have taken up pen and paper (computer and keyboard?) to, hopefully, fix this tale in the solid fiction category. Let us take the statements one at a time as they appear in the typical version passed through email.

have carried anywhere near 48,000 gallons of water, nor would she have had to. It was common practice for a ship to stop from time to time to “make their water,” which entailed filling casks from shoreside streams (remember the water was cleaner then and the water from most streams was potable).

First: The ship, United States Frigate Constitution (the prefix “USS” was not in use until 1907), was indeed a combat vessel. She had a normal crew of approximately 450 men, officers, and midshipmen, but for her maiden voyage, during which this supposed version takes place, she was nowhere near her full complement. In fact, the orders Constitution’s first commander, Captain Samuel Nicholson, received instructed him to enlist 150 Able Seamen, 103 midshipmen and Ordinary Seamen (obviously, the preponderance of that number would be seamen; typically only eight to a dozen midshipmen were on any ship). Further, she could not possibly

Fourth: “Her mission: ‘to destroy and harass English shipping.’” No! No! No! The United States was not at war with Great Britain in 1798 (American Revolution hostilities ended in 1783 and the War of 1812 did not begin until … 1812) and an American warship “harass[ing] and destroy[ing] English shipping” would have been instantly labeled a pirate, opening the crew and officers to capture by any nation and a quick trial followed closely by hanging. Constitution’s orders were, in fact, the same as those issued by President Adams to all ships of the US Navy, namely “…to seize, take, and bring into any Port of the United States … any Armed

Second: After many delays finding crew, supplies, cannon, powder, and shot, the ship sailed to King’s Roads (now President’s Roads) off Castle Island at the entrance to Boston Harbor on 2 July (1798) to finish loading cannon and shot from the fort on the island. She was finally ready for sea on 22 July and sailed. Third: The story as forwarded in emails states she carried 7,400 cannon shot, 11,600 pounds of black powder, and 79,400 gallons of rum. In fact, the load out included “200 cutlasses, 100 pairs of pistols, 100 boarding axes, 2,957 24-pounder double headed and chain shot, 60 muskets, 3,000 flannel cartridges [for the 24-pounders], and 1,792 pounds of musket and pistol balls, 1,755 gallons of brandy, 2,143 gallons of rum.” Additionally, some thirty 24-pounder cannon were brought aboard.