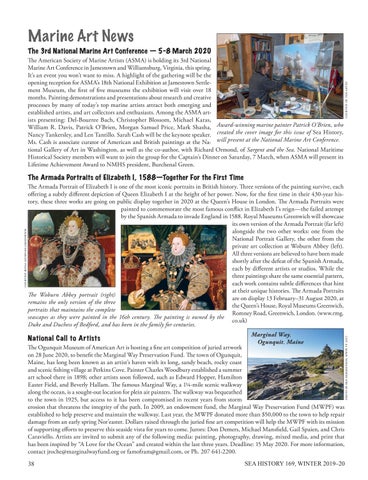 The American Society of Marine Artists (ASMA) is holding its 3rd National Marine Art Conference in Jamestown and Williamsburg, Virginia, this spring. It’s an event you won’t want to miss. A highlight of the gathering will be the opening reception for ASMA’s 18th National Exhibition at Jamestown Settlement Museum, the first of five museums the exhibition will visit over 18 months. Painting demonstrations and presentations about research and creative processes by many of today’s top marine artists attract both emerging and established artists, and art collectors and enthusiasts. Among the ASMA artists presenting: Del-Bourree Bach, Christopher Blossom, Michael Karas, William R. Davis, Patrick O’Brien, Morgan Samuel Price, Mark Shasha, Award-winning marine painter Patrick O’Brien, who Nancy Tankersley, and Len Tantillo. Sarah Cash will be the keynote speaker. created the cover image for this issue of Sea History, Ms. Cash is associate curator of American and British paintings at the Na- will present at the National Marine Art Conference. tional Gallery of Art in Washington, as well as the co-author, with Richard Ormond, of Sargent and the Sea. National Maritime Historical Society members will want to join the group for the Captain’s Dinner on Saturday, 7 March, when ASMA will present its Lifetime Achievement Award to NMHS president, Burchenal Green.

The Armada Portrait of Elizabeth I is one of the most iconic portraits in British history. Three versions of the painting survive, each offering a subtly different depiction of Queen Elizabeth I at the height of her power. Now, for the first time in their 430-year history, these three works are going on public display together in 2020 at the Queen’s House in London. The Armada Portraits were painted to commemorate the most famous conflict in Elizabeth I’s reign—the failed attempt by the Spanish Armada to invade England in 1588. Royal Museums Greenwich will showcase its own version of the Armada Portrait (far left) alongside the two other works: one from the National Portrait Gallery, the other from the private art collection at Woburn Abbey (left). All three versions are believed to have been made shortly after the defeat of the Spanish Armada, each by different artists or studios. While the three paintings share the same essential pattern, each work contains subtle differences that hint at their unique histories. The Armada Portraits The Woburn Abbey portrait (right) are on display 13 February–31 August 2020, at remains the only version of the three the Queen’s House, Royal Museums Greenwich, portraits that maintains the complete Romney Road, Greenwich, London. (www.rmg. seascapes as they were painted in the 16th century. The painting is owned by the co.uk) Duke and Duchess of Bedford, and has been in the family for centuries.

The Armada Portraits of Elizabeth I, 1588—Together For the First Time

The Ogunquit Museum of American Art is hosting a fine art competition of juried artwork on 28 June 2020, to benefit the Marginal Way Preservation Fund. The town of Ogunquit, Maine, has long been known as an artist’s haven with its long, sandy beach, rocky coast and scenic fishing village at Perkins Cove. Painter Charles Woodbury established a summer art school there in 1898; other artists soon followed, such as Edward Hopper, Hamilton Easter Field, and Beverly Hallam. The famous Marginal Way, a 1¼-mile scenic walkway along the ocean, is a sought-out location for plein air painters. The walkway was bequeathed to the town in 1925, but access to it has been compromised in recent years from storm erosion that threatens the integrity of the path. In 2009, an endowment fund, the Marginal Way Preservation Fund (MWPF) was established to help preserve and maintain the walkway. Last year, the MWPF donated more than $50,000 to the town to help repair damage from an early spring Nor’easter. Dollars raised through the juried fine art competition will help the MWPF with its mission of supporting efforts to preserve this seaside vista for years to come. Jurors: Don Demers, Michael Mansfield, Gail Spaien, and Chris Caraviello. Artists are invited to submit any of the following media: painting, photography, drawing, mixed media, and print that has been inspired by “A Love for the Ocean” and created within the last three years. Deadline: 15 May 2020. For more information, contact jroche@marginalwayfund.org or famofram@gmail.com, or Ph. 207 641-2200. 38