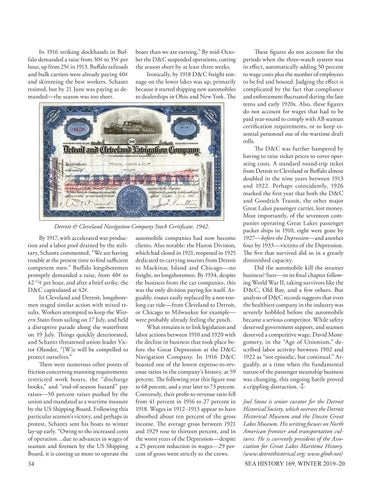 In 1916 striking dockhands in Buffalo demanded a raise from 30¢ to 35¢ per hour, up from 25¢ in 1913. Buffalo railroads and bulk carriers were already paying 40¢ and skimming the best workers. Schantz resisted, but by 21 June was paying as demanded—the season was too short.

boats than we are earning.” By mid-October the D &amp; C suspended operations, cutting the season short by at least three weeks. Ironically, by 1918 D &amp; C freight tonnage on the lower lakes was up, primarily because it started shipping new automobiles to dealerships in Ohio and New York. The

Detroit &amp; Cleveland Navigation Company Stock Certificate, 1942. By 1917, with accelerated war production and a labor pool drained by the military, Schantz commented, “We are having trouble at the present time to find sufficient competent men.” Buffalo longshoremen promptly demanded a raise, from 40¢ to 42 1/2¢ per hour, and after a brief strike, the D &amp; C capitulated at 42¢. In Cleveland and Detroit, longshoremen staged similar action with mixed results. Workers attempted to keep the Western States from sailing on 17 July, and held a disruptive parade along the waterfront on 19 July. Things quickly deteriorated, and Schantz threatened union leader Victor Olander, “[W]e will be compelled to protect ourselves.” There were numerous other points of friction concerning manning requirements: restricted work hours, the “discharge books,” and “end-of-season hazard” pay raises—50 percent raises pushed by the union and mandated as a wartime measure by the US Shipping Board. Following this particular seamen’s victory, and perhaps in protest, Schantz sent his boats to winter lay-up early. “Owing to the increased costs of operation…due to advances in wages of seamen and firemen by the US Shipping Board, it is costing us more to operate the 34

automobile companies had now become clients. Also notable: the Huron Division, which had closed in 1921, reopened in 1925 dedicated to carrying tourists from Detroit to Mackinac Island and Chicago—no freight, no longshoremen. By 1934, despite the business from the car companies, this was the only division paying for itself. Arguably, routes easily replaced by a not-toolong car ride—from Cleveland to Detroit, or Chicago to Milwaukee for example— were probably already feeling the pinch. What remains is to link legislation and labor actions between 1910 and 1920 with the decline in business that took place before the Great Depression at the D &amp; C Navigation Company. In 1916 D &amp; C boasted one of the lowest expense-to-revenue ratios in the company’s history, at 59 percent. The following year this figure rose to 68 percent, and a year later to 73 percent. Conversely, their profit-to-revenue ratio fell from 41 percent in 1916 to 27 percent in 1918. Wages in 1912–1913 appear to have absorbed about ten percent of the gross income. The average gross between 1921 and 1929 rose to thirteen percent, and in the worst years of the Depression—despite a 25 percent reduction in wages—29 percent of gross went strictly to the crews.

These figures do not account for the periods when the three-watch system was in effect, automatically adding 50 percent to wage costs plus the number of employees to be fed and housed. Judging the effect is complicated by the fact that compliance and enforcement fluctuated during the late teens and early 1920s. Also, these figures do not account for wages that had to be paid year-round to comply with AB seaman certification requirements, or to keep essential personnel out of the wartime draft rolls. The D &amp; C was further hampered by having to raise ticket prices to cover operating costs. A standard round-trip ticket from Detroit to Cleveland or Buffalo almost doubled in the nine years between 1913 and 1922. Perhaps coincidently, 1926 marked the first year that both the D &amp; C and Goodrich Transit, the other major Great Lakes passenger carrier, lost money. Most importantly, of the seventeen companies operating Great Lakes passenger packet ships in 1910, eight were gone by 1927—before the Depression—and another four by 1933—victims of the Depression. The five that survived did so in a greatly diminished capacity. Did the automobile kill the steamer business? Sure—in its final chapter following World War II, taking survivors like the D &amp; C , Old Bay, and a few others. But analysis of D &amp; C records suggests that even the healthiest company in the industry was severely hobbled before the automobile became a serious competitor. While safety deserved government support, and seamen deserved a competitive wage, David Montgomery, in the “Age of Unionism,” described labor activity between 1902 and 1922 as “not episodic, but continual.” Arguably, at a time when the fundamental nature of the passenger steamship business was changing, this ongoing battle proved a crippling distraction. Joel Stone is senior curator for the Detroit Historical Society, which oversees the Detroit Historical Museum and the Dossin Great Lakes Museum. His writing focuses on North American frontier and transportation cultures. He is currently president of the Association for Great Lakes Maritime History. (www.detroithistorical.org; www.glmh.net) SEA HISTORY 169, WINTER 2019–20