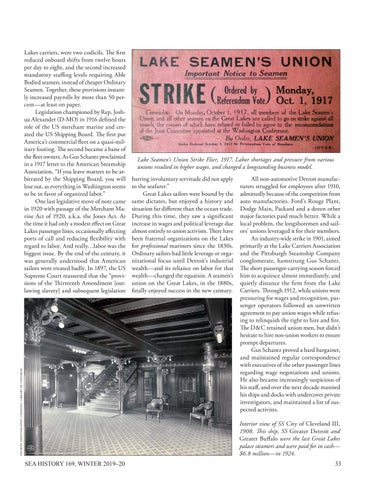 Lakes carriers, were two codicils. The first reduced onboard shifts from twelve hours per day to eight, and the second increased mandatory staffing levels requiring Able Bodied seamen, instead of cheaper Ordinary Seamen. Together, these provisions instantly increased payrolls by more than 50 percent—at least on paper. Legislation championed by Rep. Joshua Alexander (D-MO) in 1916 defined the role of the US merchant marine and created the US Shipping Board. The first put America’s commercial fleet on a quasi-military footing. The second became a bane of the fleet owners. As Gus Schantz proclaimed in a 1917 letter to the American Steamship Association, “If you leave matters to be arbitrated by the Shipping Board, you will lose out, as everything in Washington seems to be in favor of organized labor.” One last legislative move of note came in 1920 with passage of the Merchant Marine Act of 1920, a.k.a. the Jones Act. At the time it had only a modest effect on Great Lakes passenger lines, occasionally affecting ports of call and reducing flexibility with regard to labor. And really…labor was the biggest issue. By the end of the century, it was generally understood that American sailors were treated badly. In 1897, the US Supreme Court reasserted that the “provisions of the Thirteenth Amendment [outlawing slavery] and subsequent legislation

Lake Seamen’s Union Strike Flier, 1917. Labor shortages and pressure from various unions resulted in higher wages, and changed a longstanding business model. barring involuntary servitude did not apply to the seafarer.” Great Lakes sailors were bound by the same dictates, but enjoyed a history and situation far different than the ocean trade. During this time, they saw a significant increase in wages and political leverage due almost entirely to union activism. There have been fraternal organizations on the Lakes for professional mariners since the 1830s. Ordinary sailors had little leverage or organizational focus until Detroit’s industrial wealth—and its reliance on labor for that wealth—changed the equation. A seamen’s union on the Great Lakes, in the 1880s, finally enjoyed success in the new century.

All non-automotive Detroit manufacturers struggled for employees after 1910, admittedly because of the competition from auto manufactories. Ford’s Rouge Plant, Dodge Main, Packard and a dozen other major factories paid much better. While a local problem, the longshoremen and sailors’ unions leveraged it for their members. An industry-wide strike in 1901, aimed primarily at the Lake Carriers Association and the Pittsburgh Steamship Company conglomerate, hamstrung Gus Schantz. The short passenger-carrying season forced him to acquiesce almost immediately, and quietly distance the firm from the Lake Carriers. Through 1912, while unions were pressuring for wages and recognition, passenger operators followed an unwritten agreement to pay union wages while refusing to relinquish the right to hire and fire. The D &amp; C retained union men, but didn’t hesitate to hire non-union workers to ensure prompt departures. Gus Schantz proved a hard bargainer, and maintained regular correspondence with executives of the other passenger lines regarding wage negotiations and unions. He also became increasingly suspicious of his staff, and over the next decade manned his ships and docks with undercover private investigators, and maintained a list of suspected activists. Interior view of SS City of Cleveland III, 1908. This ship, SS Greater Detroit and Greater Buffalo were the last Great Lakes palace steamers and were paid for in cash— $6.8 million—in 1924.