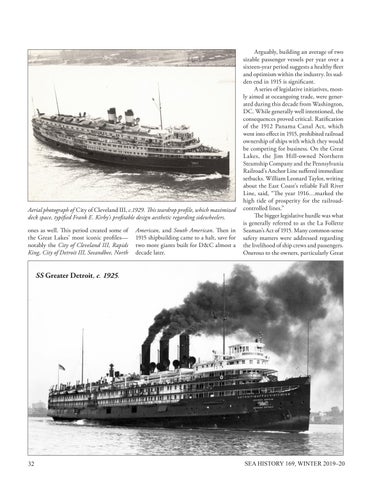 American, and South American. Then in 1915 shipbuilding came to a halt, save for two more giants built for D & C almost a decade later.

Arguably, building an average of two sizable passenger vessels per year over a sixteen-year period suggests a healthy fleet and optimism within the industry. Its sudden end in 1915 is significant. A series of legislative initiatives, mostly aimed at oceangoing trade, were generated during this decade from Washington, DC. While generally well intentioned, the consequences proved critical. Ratification of the 1912 Panama Canal Act, which went into effect in 1915, prohibited railroad ownership of ships with which they would be competing for business. On the Great Lakes, the Jim Hill-owned Northern Steamship Company and the Pennsylvania Railroad’s Anchor Line suffered immediate setbacks. William Leonard Taylor, writing about the East Coast’s reliable Fall River Line, said, “The year 1916…marked the high tide of prosperity for the railroadcontrolled lines.” The bigger legislative hurdle was what is generally referred to as the La Follette Seaman’s Act of 1915. Many common-sense safety matters were addressed regarding the livelihood of ship crews and passengers. Onerous to the owners, particularly Great