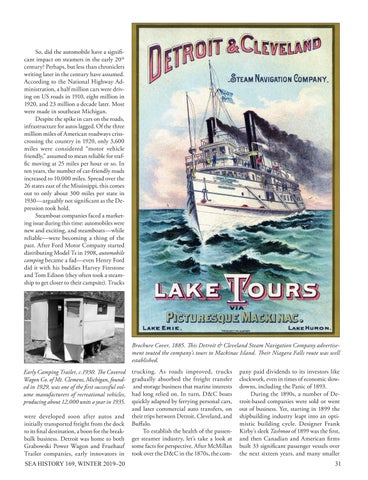 So, did the automobile have a significant impact on steamers in the early 20th century? Perhaps, but less than chroniclers writing later in the century have assumed. According to the National Highway Administration, a half million cars were driving on US roads in 1910, eight million in 1920, and 23 million a decade later. Most were made in southeast Michigan. Despite the spike in cars on the roads, infrastructure for autos lagged. Of the three million miles of American roadways crisscrossing the country in 1920, only 3,600 miles were considered “motor vehicle friendly,” assumed to mean reliable for traffic moving at 25 miles per hour or so. In ten years, the number of car-friendly roads increased to 10,000 miles. Spread over the 26 states east of the Mississippi, this comes out to only about 300 miles per state in 1930—arguably not significant as the Depression took hold. Steamboat companies faced a marketing issue during this time: automobiles were new and exciting, and steamboats—while reliable—were becoming a thing of the past. After Ford Motor Company started distributing Model Ts in 1908, automobile camping became a fad—even Henry Ford did it with his buddies Harvey Firestone and Tom Edison (they often took a steamship to get closer to their campsite). Trucks

Brochure Cover, 1885. This Detroit & Cleveland Steam Navigation Company advertisement touted the company’s tours to Mackinac Island. Their Niagara Falls route was well established. Early Camping Trailer, c.1930. The Covered Wagon Co. of Mt. Clemens, Michigan, founded in 1929, was one of the first successful volume manufacturers of recreational vehicles, producing about 12,000 units a year in 1935. were developed soon after autos and initially transported freight from the dock to its final destination, a boon for the breakbulk business. Detroit was home to both Grabowski Power Wagon and Fruehauf Trailer companies, early innovators in

trucking. As roads improved, trucks gradually absorbed the freight transfer and storage business that marine interests had long relied on. In turn, D & C boats quickly adapted by ferrying personal cars, and later commercial auto transfers, on their trips between Detroit, Cleveland, and Buffalo. To establish the health of the passenger steamer industry, let’s take a look at some facts for perspective. After McMillan took over the D & C in the 1870s, the com-

pany paid dividends to its investors like clockwork, even in times of economic slowdowns, including the Panic of 1893. During the 1890s, a number of Detroit-based companies were sold or went out of business. Yet, starting in 1899 the shipbuilding industry leapt into an optimistic building cycle. Designer Frank Kirby’s sleek Tashmoo of 1899 was the first, and then Canadian and American firms built 33 significant passenger vessels over the next sixteen years, and many smaller