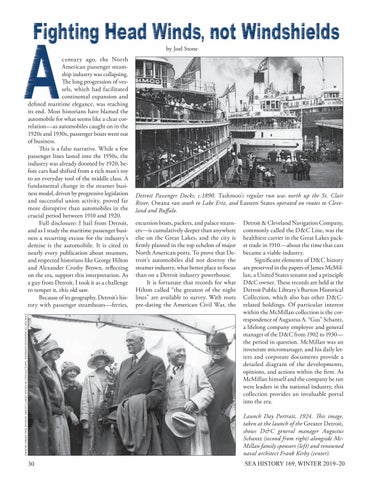 century ago, the North American passenger steamship industry was collapsing. The long progression of vessels, which had facilitated continental expansion and defined maritime elegance, was reaching its end. Most historians have blamed the automobile for what seems like a clear correlation—as automobiles caught on in the 1920s and 1930s, passenger boats went out of business. This is a false narrative. While a few passenger lines lasted into the 1950s, the industry was already doomed by 1920, before cars had shifted from a rich man’s toy to an everyday tool of the middle class. A fundamental change in the steamer business model, driven by progressive legislation and successful union activity, proved far more disruptive than automobiles in the crucial period between 1910 and 1920. Full disclosure: I hail from Detroit, and as I study the maritime passenger business a recurring excuse for the industry’s demise is the automobile. It is cited in nearly every publication about steamers, and respected historians like George Hilton and Alexander Crosby Brown, reflecting on the era, support this interpretation. As a guy from Detroit, I took it as a challenge to temper it, this old saw. Because of its geography, Detroit’s history with passenger steamboats—ferries,

Detroit Passenger Docks, c.1890. Tashmoo’s regular run was north up the St. Clair River, Owana ran south to Lake Erie, and Eastern States operated on routes to Cleveland and Buffalo. excursion boats, packets, and palace steamers—is cumulatively deeper than anywhere else on the Great Lakes, and the city is firmly planted in the top echelon of major North American ports. To prove that Detroit’s automobiles did not destroy the steamer industry, what better place to focus than on a Detroit industry powerhouse. It is fortunate that records for what Hilton called “the greatest of the night lines” are available to survey. With roots pre-dating the American Civil War, the

Detroit & Cleveland Navigation Company, commonly called the D & C Line, was the healthiest carrier in the Great Lakes packet trade in 1910—about the time that cars became a viable industry. Significant elements of D & C history are preserved in the papers of James McMillan, a United States senator and a principle D & C owner. These records are held at the Detroit Public Library’s Burton Historical Collection, which also has other D & Crelated holdings. Of particular interest within the McMillan collection is the correspondence of Augustus A. “Gus” Schantz, a lifelong company employee and general manager of the D & C from 1902 to 1930— the period in question. McMillan was an inveterate micromanager, and his daily letters and corporate documents provide a detailed diagram of the developments, opinions, and actions within the firm. As McMillan himself and the company he ran were leaders in the national industry, this collection provides an invaluable portal into the era. Launch Day Portrait, 1924. This image, taken at the launch of the Greater Detroit, shows D  &  C general manager Augustus Schantz (second from right) alongside McMillan family sponsors (left) and renowned naval architect Frank Kirby (center).