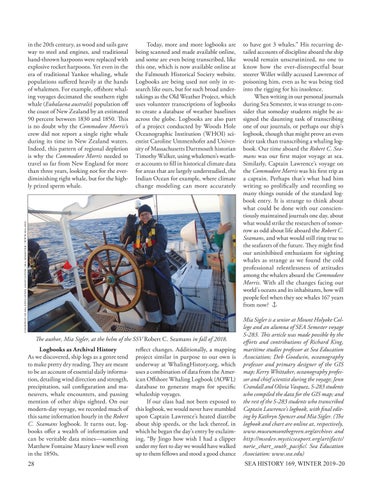 Today, more and more logbooks are being scanned and made available online, and some are even being transcribed, like this one, which is now available online at the Falmouth Historical Society website. Logbooks are being used not only in research like ours, but for such broad undertakings as the Old Weather Project, which uses volunteer transcriptions of logbooks to create a database of weather baselines across the globe. Logbooks are also part of a project conducted by Woods Hole Oceanographic Institution (WHOI) scientist Caroline Ummenhofer and University of Massachusetts Dartmouth historian Timothy Walker, using whalemen’s weather accounts to fill in historical climate data for areas that are largely understudied, the Indian Ocean for example, where climate change modeling can more accurately

in the 20th century, as wood and sails gave way to steel and engines, and traditional hand-thrown harpoons were replaced with explosive rocket harpoons. Yet even in the era of traditional Yankee whaling, whale populations suffered heavily at the hands of whalemen. For example, offshore whaling voyages decimated the southern right whale (Eubalaena australis) population off the coast of New Zealand by an estimated 90 percent between 1830 and 1850. This is no doubt why the Commodore Morris’s crew did not report a single right whale during its time in New Zealand waters. Indeed, this pattern of regional depletion is why the Commodore Morris needed to travel so far from New England for more than three years, looking not for the everdiminishing right whale, but for the highly prized sperm whale.

The author, Mia Sigler, at the helm of the SSV Robert C. Seamans in fall of 2018. Logbooks as Archival History As we discovered, ship logs as a genre tend to make pretty dry reading. They are meant to be an account of essential daily information, detailing wind direction and strength, precipitation, sail configuration and maneuvers, whale encounters, and passing mention of other ships sighted. On our modern-day voyage, we recorded much of this same information hourly in the Robert C. Seamans logbook. It turns out, logbooks offer a wealth of information and can be veritable data mines—something Matthew Fontaine Maury knew well even in the 1850s. 28

reflect changes. Additionally, a mapping project similar in purpose to our own is underway at WhalingHistory.org, which uses a combination of data from the American Offshore Whaling Logbook (AOWL) database to generate maps for specific whaleship voyages. If our class had not been exposed to this logbook, we would never have stumbled upon Captain Lawrence’s heated diatribe about ship speeds, or the lack thereof, in which he began the day’s entry by exclaiming, “By Jingo how wish I had a clipper under my feet to day we would have walked up to them fellows and stood a good chance

to have got 3 whales.” His recurring detailed accounts of discipline aboard the ship would remain unscrutinized, no one to know how the ever-disrespectful boat steerer Willet wildly accused Lawrence of poisoning him, even as he was being tied into the rigging for his insolence. When writing in our personal journals during Sea Semester, it was strange to consider that someday students might be assigned the daunting task of transcribing one of our journals, or perhaps our ship’s logbook, though that might prove an even drier task than transcribing a whaling logbook. Our time aboard the Robert C. Seamans was our first major voyage at sea. Similarly, Captain Lawrence’s voyage on the Commodore Morris was his first trip as a captain. Perhaps that’s what had him writing so prolifically and recording so many things outside of the standard logbook entry. It is strange to think about what could be done with our conscientiously maintained journals one day, about what would strike the researchers of tomorrow as odd about life aboard the Robert C. Seamans, and what would still ring true to the seafarers of the future. They might find our uninhibited enthusiasm for sighting whales as strange as we found the cold professional relentlessness of attitudes among the whalers aboard the Commodore Morris. With all the changes facing our world’s oceans and its inhabitants, how will people feel when they see whales 167 years from now? Mia Sigler is a senior at Mount Holyoke College and an alumna of SEA Semester voyage S-283. This article was made possible by the efforts and contributions of Richard King, maritime studies professor at Sea Education Association; Deb Goodwin, oceanography professor and primary designer of the GIS map; Kerry Whittaker, oceanography professor and chief scientist during the voyage; Jenn Crandall and Olivia Vasquez, S-283 students who compiled the data for the GIS map; and the rest of the S-283 students who transcribed Captain Lawrence’s logbook, with final editing by Kathryn Spencer and Mia Sigler. (The logbook and chart are online at, respectively, www.museumsonthegreen.org/archives and http://msedev.mysticseaport.org/artifacts/ norie_chart_south_pacific/. Sea Education Association: www.sea.edu) SEA HISTORY 169, WINTER 2019–20