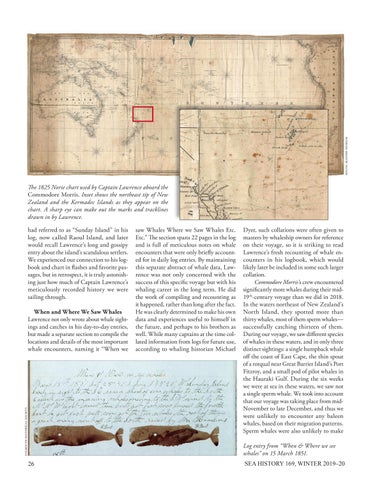 The 1825 Norie chart used by Captain Lawrence aboard the Commodore Morris. Inset shows the northeast tip of New Zealand and the Kermadec Islands as they appear on the chart. A sharp eye can make out the marks and tracklines drawn in by Lawrence. had referred to as “Sunday Island” in his log, now called Raoul Island, and later would recall Lawrence’s long and gossipy entry about the island’s scandalous settlers. We experienced our connection to his logbook and chart in flashes and favorite passages, but in retrospect, it is truly astonishing just how much of Captain Lawrence’s meticulously recorded history we were sailing through.

When and Where We Saw Whales Lawrence not only wrote about whale sightings and catches in his day-to-day entries, but made a separate section to compile the locations and details of the most important whale encounters, naming it “When we

saw Whales Where we Saw Whales Etc. Etc.” The section spans 22 pages in the log and is full of meticulous notes on whale encounters that were only briefly accounted for in daily log entries. By maintaining this separate abstract of whale data, Lawrence was not only concerned with the success of this specific voyage but with his whaling career in the long term. He did the work of compiling and recounting as it happened, rather than long after the fact. He was clearly determined to make his own data and experiences useful to himself in the future, and perhaps to his brothers as well. While many captains at the time collated information from logs for future use, according to whaling historian Michael

Dyer, such collations were often given to masters by whaleship owners for reference on their voyage, so it is striking to read Lawrence’s fresh recounting of whale encounters in his logbook, which would likely later be included in some such larger collation. Commodore Morris’s crew encountered significantly more whales during their mid19th-century voyage than we did in 2018. In the waters northeast of New Zealand’s North Island, they spotted more than thirty whales, most of them sperm whales— successfully catching thirteen of them. During our voyage, we saw different species of whales in these waters, and in only three distinct sightings: a single humpback whale off the coast of East Cape, the thin spout of a rorqual near Great Barrier Island’s Port Fitzroy, and a small pod of pilot whales in the Hauraki Gulf. During the six weeks we were at sea in these waters, we saw not a single sperm whale. We took into account that our voyage was taking place from midNovember to late December, and thus we were unlikely to encounter any baleen whales, based on their migration patterns. Sperm whales were also unlikely to make Log entry from “When & Where we see whales” on 15 March 1851. SEA HISTORY 169, WINTER 2019–20