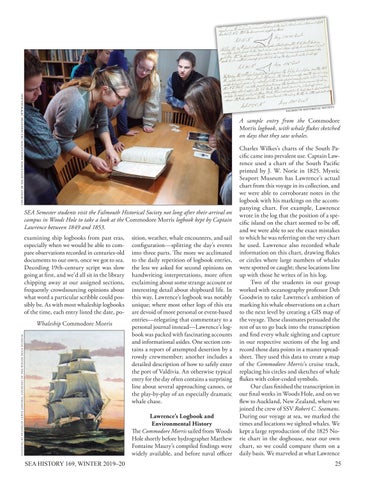 A sample entry from the Commodore Morris logbook, with whale flukes sketched on days that they saw whales.

SEA Semester students visit the Falmouth Historical Society not long after their arrival on campus in Woods Hole to take a look at the Commodore Morris logbook kept by Captain Lawrence between 1849 and 1853. examining ship logbooks from past eras, especially when we would be able to compare observations recorded in centuries-old documents to our own, once we got to sea. Decoding 19th-century script was slow going at first, and we’d all sit in the library chipping away at our assigned sections, frequently crowdsourcing opinions about what word a particular scribble could possibly be. As with most whaleship logbooks of the time, each entry listed the date, poWhaleship Commodore Morris painting by franklin lewis gifford, courtesy of the woods hole museum

sition, weather, whale encounters, and sail configuration—splitting the day’s events into three parts. The more we acclimated to the daily repetition of logbook entries, the less we asked for second opinions on handwriting interpretations, more often exclaiming about some strange account or interesting detail about shipboard life. In this way, Lawrence’s logbook was notably unique; where most other logs of this era are devoid of more personal or event-based entries—relegating that commentary to a personal journal instead—Lawrence’s logbook was packed with fascinating accounts and informational asides. One section contains a report of attempted desertion by a rowdy crewmember; another includes a detailed description of how to safely enter the port of Valdivia. An otherwise typical entry for the day often contains a surprising line about several approaching canoes, or the play-by-play of an especially dramatic whale chase. Lawrence’s Logbook and Environmental History The Commodore Morris sailed from Woods Hole shortly before hydrographer Matthew Fontaine Maury’s compiled findings were widely available, and before naval officer

Charles Wilkes’s charts of the South Pacific came into prevalent use. Captain Lawrence used a chart of the South Pacific printed by J. W. Norie in 1825. Mystic Seaport Museum has Lawrence’s actual chart from this voyage in its collection, and we were able to corroborate notes in the logbook with his markings on the accompanying chart. For example, Lawrence wrote in the log that the position of a specific island on the chart seemed to be off, and we were able to see the exact mistakes to which he was referring on the very chart he used. Lawrence also recorded whale information on this chart, drawing flukes or circles where large numbers of whales were spotted or caught; these locations line up with those he writes of in his log. Two of the students in our group worked with oceanography professor Deb Goodwin to take Lawrence’s ambition of marking his whale observations on a chart to the next level by creating a GIS map of the voyage. These classmates persuaded the rest of us to go back into the transcription and find every whale sighting and capture in our respective sections of the log and record those data points in a master spreadsheet. They used this data to create a map of the Commodore Morris’s cruise track, replacing his circles and sketches of whale flukes with color-coded symbols. Our class finished the transcription in our final weeks in Woods Hole, and on we flew to Auckland, New Zealand, where we joined the crew of SSV Robert C. Seamans. During our voyage at sea, we marked the times and locations we sighted whales. We kept a large reproduction of the 1825 Norie chart in the doghouse, near our own chart, so we could compare them on a daily basis. We marveled at what Lawrence