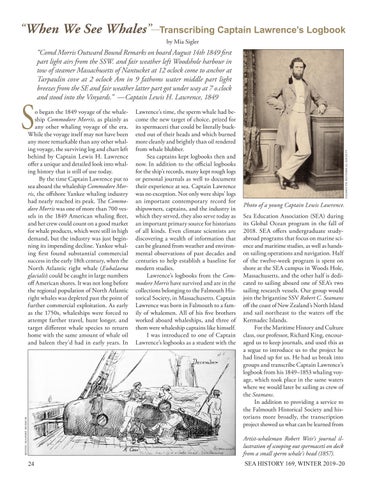 o began the 1849 voyage of the whaleship Commodore Morris, as plainly as any other whaling voyage of the era. While the voyage itself may not have been any more remarkable than any other whaling voyage, the surviving log and chart left behind by Captain Lewis H. Lawrence offer a unique and detailed look into whaling history that is still of use today. By the time Captain Lawrence put to sea aboard the whaleship Commodore Morris, the offshore Yankee whaling industry had nearly reached its peak. The Commodore Morris was one of more than 700 vessels in the 1849 American whaling fleet, and her crew could count on a good market for whale products, which were still in high demand, but the industry was just beginning its impending decline. Yankee whaling first found substantial commercial success in the early 18th century, when the North Atlantic right whale (Eubalaena glacialis) could be caught in large numbers off American shores. It was not long before the regional population of North Atlantic right whales was depleted past the point of further commercial exploitation. As early as the 1750s, whaleships were forced to attempt farther travel, hunt longer, and target different whale species to return home with the same amount of whale oil and baleen they’d had in early years. In

Lawrence’s time, the sperm whale had become the new target of choice, prized for its spermaceti that could be literally bucketed out of their heads and which burned more cleanly and brightly than oil rendered from whale blubber. Sea captains kept logbooks then and now. In addition to the official logbooks for the ship’s records, many kept rough logs or personal journals as well to document their experience at sea. Captain Lawrence was no exception. Not only were ships’ logs an important contemporary record for shipowners, captains, and the industry in which they served, they also serve today as an important primary source for historians of all kinds. Even climate scientists are discovering a wealth of information that can be gleaned from weather and environmental observations of past decades and centuries to help establish a baseline for modern studies. Lawrence’s logbooks from the Commodore Morris have survived and are in the collections belonging to the Falmouth Historical Society, in Massachusetts. Captain Lawrence was born in Falmouth to a family of whalemen. All of his five brothers worked aboard whaleships, and three of them were whaleship captains like himself. I was introduced to one of Captain Lawrence’s logbooks as a student with the

“Comd Morris Outward Bound Remarks on board August 14th 1849 first part light airs from the SSW. and fair weather left Woodshole harbour in tow of steamer Massachusetts of Nantucket at 12 oclock come to anchor at Tarpaulin cove at 2 oclock Am in 9 fathoms water middle part light breezes from the SE and fair weather latter part got under way at 7 o.clock and stood into the Vinyards.” —Captain Lewis H. Lawrence, 1849

Photo of a young Captain Lewis Lawrence. Sea Education Association (SEA) during its Global Ocean program in the fall of 2018. SEA offers undergraduate studyabroad programs that focus on marine science and maritime studies, as well as handson sailing operations and navigation. Half of the twelve-week program is spent on shore at the SEA campus in Woods Hole, Massachusetts, and the other half is dedicated to sailing aboard one of SEA’s two sailing research vessels. Our group would join the brigantine SSV Robert C. Seamans off the coast of New Zealand’s North Island and sail northeast to the waters off the Kermadec Islands. For the Maritime History and Culture class, our professor, Richard King, encouraged us to keep journals, and used this as a segue to introduce us to the project he had lined up for us. He had us break into groups and transcribe Captain Lawrence’s logbook from his 1849–1853 whaling voyage, which took place in the same waters where we would later be sailing as crew of the Seamans. In addition to providing a service to the Falmouth Historical Society and historians more broadly, the transcription project showed us what can be learned from Artist-whaleman Robert Weir’s journal illustration of scooping out spermaceti on deck from a small sperm whale’s head (1857).