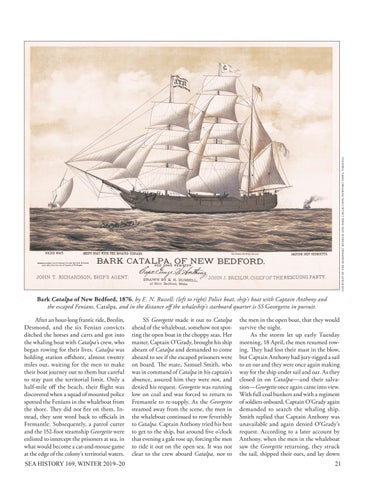 Bark Catalpa of New Bedford, 1876, by E. N. Russell: (left to right) Police boat, ship’s boat with Captain Anthony and the escaped Fenians, Catalpa, and in the distance off the whaleship’s starboard quarter is SS Georgette in pursuit. After an hour-long frantic ride, Breslin, Desmond, and the six Fenian convicts ditched the horses and carts and got into the whaling boat with Catalpa’s crew, who began rowing for their lives. Catalpa was holding station offshore, almost twenty miles out, waiting for the men to make their boat journey out to them but careful to stay past the territorial limit. Only a half-mile off the beach, their flight was discovered when a squad of mounted police spotted the Fenians in the whaleboat from the shore. They did not fire on them. Instead, they sent word back to officials in Fremantle. Subsequently, a patrol cutter and the 152-foot steamship Georgette were enlisted to intercept the prisoners at sea, in what would become a cat-and-mouse game at the edge of the colony’s territorial waters.

SS Georgette made it out to Catalpa ahead of the whaleboat, somehow not spotting the open boat in the choppy seas. Her master, Captain O’Grady, brought his ship abeam of Catalpa and demanded to come aboard to see if the escaped prisoners were on board. The mate, Samuel Smith, who was in command of Catalpa in his captain’s absence, assured him they were not, and denied his request. Georgette was running low on coal and was forced to return to Fremantle to re-supply. As the Georgette steamed away from the scene, the men in the whaleboat continued to row feverishly to Catalpa. Captain Anthony tried his best to get to the ship, but around five o’clock that evening a gale rose up, forcing the men to ride it out on the open sea. It was not clear to the crew aboard Catalpa, nor to

the men in the open boat, that they would survive the night. As the storm let up early Tuesday morning, 18 April, the men resumed rowing. They had lost their mast in the blow, but Captain Anthony had jury-rigged a sail to an oar and they were once again making way for the ship under sail and oar. As they closed in on Catalpa—and their salvation—Georgette once again came into view. With full coal bunkers and with a regiment of soldiers onboard, Captain O’Grady again demanded to search the whaling ship. Smith replied that Captain Anthony was unavailable and again denied O’Grady’s request. According to a later account by Anthony, when the men in the whaleboat saw the Georgette returning, they struck the sail, shipped their oars, and lay down