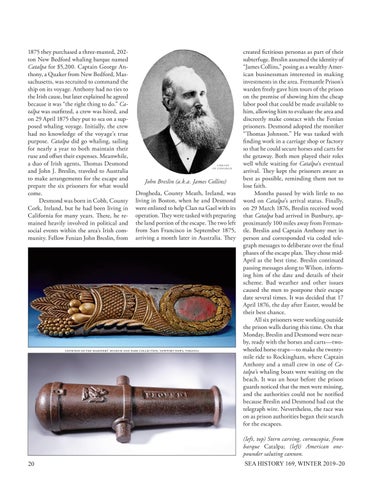 1875 they purchased a three-masted, 202ton New Bedford whaling barque named Catalpa for $5,200. Captain George Anthony, a Quaker from New Bedford, Massachusetts, was recruited to command the ship on its voyage. Anthony had no ties to the Irish cause, but later explained he agreed because it was “the right thing to do.” Catalpa was outfitted, a crew was hired, and on 29 April 1875 they put to sea on a supposed whaling voyage. Initially, the crew had no knowledge of the voyage’s true purpose. Catalpa did go whaling, sailing for nearly a year to both maintain their ruse and offset their expenses. Meanwhile, a duo of Irish agents, Thomas Desmond and John J. Breslin, traveled to Australia to make arrangements for the escape and prepare the six prisoners for what would come. Desmond was born in Cobh, County Cork, Ireland, but he had been living in California for many years. There, he remained heavily involved in political and social events within the area’s Irish community. Fellow Fenian John Breslin, from

John Breslin (a.k.a. James Collins) Drogheda, County Meath, Ireland, was living in Boston, when he and Desmond were enlisted to help Clan na Gael with its operation. They were tasked with preparing the land portion of the escape. The two left from San Francisco in September 1875, arriving a month later in Australia. They

created fictitious personas as part of their subterfuge. Breslin assumed the identity of “James Collins,” posing as a wealthy American businessman interested in making investments in the area. Fremantle Prison’s warden freely gave him tours of the prison on the premise of showing him the cheap labor pool that could be made available to him, allowing him to evaluate the area and discreetly make contact with the Fenian prisoners. Desmond adopted the moniker “Thomas Johnson.” He was tasked with finding work in a carriage shop or factory so that he could secure horses and carts for the getaway. Both men played their roles well while waiting for Catalpa’s eventual arrival. They kept the prisoners aware as best as possible, reminding them not to lose faith. Months passed by with little to no word on Catalpa’s arrival status. Finally, on 29 March 1876, Breslin received word that Catalpa had arrived in Bunbury, approximately 100 miles away from Fremantle. Breslin and Captain Anthony met in person and corresponded via coded telegraph messages to deliberate over the final phases of the escape plan. They chose midApril as the best time. Breslin continued passing messages along to Wilson, informing him of the date and details of their scheme. Bad weather and other issues caused the men to postpone their escape date several times. It was decided that 17 April 1876, the day after Easter, would be their best chance. All six prisoners were working outside the prison walls during this time. On that Monday, Breslin and Desmond were nearby, ready with the horses and carts—twowheeled horse-traps—to make the twentymile ride to Rockingham, where Captain Anthony and a small crew in one of Catalpa’s whaling boats were waiting on the beach. It was an hour before the prison guards noticed that the men were missing, and the authorities could not be notified because Breslin and Desmond had cut the telegraph wire. Nevertheless, the race was on as prison authorities began their search for the escapees. (left, top) Stern carving, cornucopia, from barque Catalpa; (left) American onepounder saluting cannon.