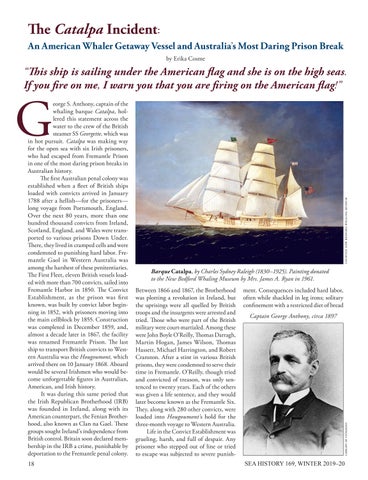 Barque Catalpa, by Charles Sydney Raleigh (1830–1925). Painting donated to the New Bedford Whaling Museum by Mrs. James A. Ryan in 1961. Between 1866 and 1867, the Brotherhood was plotting a revolution in Ireland, but the uprisings were all quelled by British troops and the insurgents were arrested and tried. Those who were part of the British military were court-martialed. Among these were John Boyle O’Reilly, Thomas Darragh, Martin Hogan, James Wilson, Thomas Hassett, Michael Harrington, and Robert Cranston. After a stint in various British prisons, they were condemned to serve their time in Fremantle. O’Reilly, though tried and convicted of treason, was only sentenced to twenty years. Each of the others was given a life sentence, and they would later become known as the Fremantle Six. They, along with 280 other convicts, were loaded into Hougoumont’s hold for the three-month voyage to Western Australia. Life in the Convict Establishment was grueling, harsh, and full of despair. Any prisoner who stepped out of line or tried to escape was subjected to severe punish-

eorge S. Anthony, captain of the whaling barque Catalpa, hollered this statement across the water to the crew of the British steamer SS Georgette, which was in hot pursuit. Catalpa was making way for the open sea with six Irish prisoners, who had escaped from Fremantle Prison in one of the most daring prison breaks in Australian history. The first Australian penal colony was established when a fleet of British ships loaded with convicts arrived in January 1788 after a hellish—for the prisoners— long voyage from Portsmouth, England. Over the next 80 years, more than one hundred thousand convicts from Ireland, Scotland, England, and Wales were transported to various prisons Down Under. There, they lived in cramped cells and were condemned to punishing hard labor. Fremantle Gaol in Western Australia was among the harshest of these penitentiaries. The First Fleet, eleven British vessels loaded with more than 700 convicts, sailed into Fremantle Harbor in 1850. The Convict Establishment, as the prison was first known, was built by convict labor beginning in 1852, with prisoners moving into the main cellblock by 1855. Construction was completed in December 1859, and, almost a decade later in 1867, the facility was renamed Fremantle Prison. The last ship to transport British convicts to Western Australia was the Hougoumont, which arrived there on 10 January 1868. Aboard would be several Irishmen who would become unforgettable figures in Australian, American, and Irish history. It was during this same period that the Irish Republican Brotherhood (IRB) was founded in Ireland, along with its American counterpart, the Fenian Brotherhood, also known as Clan na Gael. These groups sought Ireland’s independence from British control. Britain soon declared membership in the IRB a crime, punishable by deportation to the Fremantle penal colony.