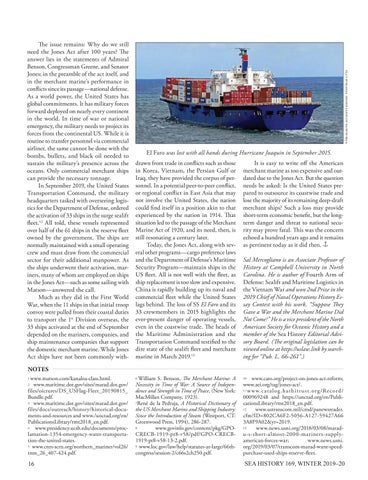 The issue remains: Why do we still need the Jones Act after 100 years? The answer lies in the statements of Admiral Benson, Congressman Greene, and Senator Jones; in the preamble of the act itself, and in the merchant marine’s performance in conflicts since its passage—national defense. As a world power, the United States has global commitments. It has military forces forward deployed on nearly every continent in the world. In time of war or national emergency, the military needs to project its forces from the continental US. While it is routine to transfer personnel via commercial airliner, the same cannot be done with the bombs, bullets, and black oil needed to sustain the military’s presence across the oceans. Only commercial merchant ships can provide the necessary tonnage. In September 2019, the United States Transportation Command, the military headquarters tasked with overseeing logistics for the Department of Defense, ordered the activation of 33 ships in the surge sealift fleet.12 All told, these vessels represented over half of the 61 ships in the reserve fleet owned by the government. The ships are normally maintained with a small operating crew and must draw from the commercial sector for their additional manpower. As the ships underwent their activation, mariners, many of whom are employed on ships in the Jones Act—such as some sailing with Matson—answered the call. Much as they did in the First World War, when the 11 ships in that initial troop convoy were pulled from their coastal duties to transport the 1st Division overseas, the 33 ships activated at the end of September depended on the mariners, companies, and ship maintenance companies that support the domestic merchant marine. While Jones Act ships have not been commonly with-

El Faro was lost with all hands during Hurricane Joaquin in September 2015. drawn from trade in conflicts such as those in Korea, Vietnam, the Persian Gulf or Iraq, they have provided the corpus of personnel. In a potential peer-to-peer conflict, or regional conflict in East Asia that may not involve the United States, the nation could find itself in a position akin to that experienced by the nation in 1914. That situation led to the passage of the Merchant Marine Act of 1920, and its need, then, is still resonating a century later. Today, the Jones Act, along with several other programs—cargo preference laws and the Department of Defense’s Maritime Security Program—maintain ships in the US fleet. All is not well with the fleet, as ship replacement is too slow and expensive. China is rapidly building up its naval and commercial fleet while the United States lags behind. The loss of SS El Faro and its 33 crewmembers in 2015 highlights the ever-present danger of operating vessels, even in the coastwise trade. The heads of the Maritime Administration and the Transportation Command testified to the dire state of the sealift fleet and merchant marine in March 2019.13

It is easy to write off the American merchant marine as too expensive and outdated due to the Jones Act. But the question needs be asked: Is the United States prepared to outsource its coastwise trade and lose the majority of its remaining deep-draft merchant ships? Such a loss may provide short-term economic benefit, but the longterm danger and threat to national security may prove fatal. This was the concern echoed a hundred years ago and it remains as pertinent today as it did then.

William S. Benson, The Merchant Marine: A Necessity in Time of War: A Source of Independence and Strength in Time of Peace, (New York: MacMillan Company, 1923). 7René de la Pedraja, A Historical Dictionary of the US Merchant Marine and Shipping Industry: Since the Introduction of Steam (Westport, CT: Greenwood Press, 1994), 286-287. 8 www.govinfo.gov/content/pkg/GPOCRECB-1919-pt8-v58/pdf/GPO-CRECB1919-pt8-v58-13-2.pdf. 9 www.loc.gov/law/help/statutes-at-large/66thcongress/session-2/c66s2ch250.pdf.

Sal Mercogliano is an Associate Professor of History at Campbell University in North Carolina. He is author of Fourth Arm of Defense: Sealift and Maritime Logistics in the Vietnam War and won 2nd Prize in the 2019 Chief of Naval Operations History Essay Contest with his work, “Suppose They Gave a War and the Merchant Marine Did Not Come?” He is a vice president of the North American Society for Oceanic History and a member of the Sea History Editorial Advisory Board. (The original legislation can be viewed online at https://uslaw.link by searching for “Pub. L. 66-261”.)