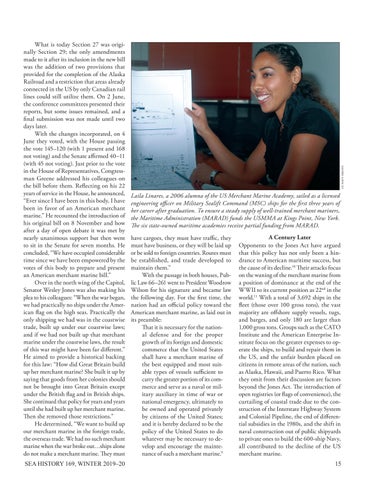 What is today Section 27 was originally Section 29; the only amendments made to it after its inclusion in the new bill was the addition of two provisions that provided for the completion of the Alaska Railroad and a restriction that areas already connected in the US by only Canadian rail lines could still utilize them. On 2 June, the conference committees presented their reports, but some issues remained, and a final submission was not made until two days later. With the changes incorporated, on 4 June they voted, with the House passing the vote 145–120 (with 1 present and 168 not voting) and the Senate affirmed 40–11 (with 45 not voting). Just prior to the vote in the House of Representatives, Congressman Greene addressed his colleagues on the bill before them. Reflecting on his 22 years of service in the House, he announced, “Ever since I have been in this body, I have been in favor of an American merchant marine.” He recounted the introduction of his original bill on 8 November and how after a day of open debate it was met by nearly unanimous support but then went to sit in the Senate for seven months. He concluded, “We have occupied considerable time since we have been empowered by the votes of this body to prepare and present an American merchant marine bill.” Over in the north wing of the Capitol, Senator Wesley Jones was also making his plea to his colleagues: “When the war began, we had practically no ships under the American flag on the high seas. Practically the only shipping we had was in the coastwise trade, built up under our coastwise laws; and if we had not built up that merchant marine under the coastwise laws, the result of this war might have been far different.” He aimed to provide a historical backing for this law: “How did Great Britain build up her merchant marine? She built it up by saying that goods from her colonies should not be brought into Great Britain except under the British flag and in British ships. She continued that policy for years and years until she had built up her merchant marine. Then she removed those restrictions.” He determined, “We want to build up our merchant marine in the foreign trade, the overseas trade. We had no such merchant marine when the war broke out…ships alone do not make a merchant marine. They must

Laila Linares, a 2006 alumna of the US Merchant Marine Academy, sailed as a licensed engineering officer on Military Sealift Command (MSC) ships for the first three years of her career after graduation. To ensure a steady supply of well-trained merchant mariners, the Maritime Administration (MARAD) funds the USMMA at Kings Point, New York. The six state-owned maritime academies receive partial funding from MARAD. have cargoes, they must have traffic, they must have business, or they will be laid up or be sold to foreign countries. Routes must be established, and trade developed to maintain them.” With the passage in both houses, Public Law 66–261 went to President Woodrow Wilson for his signature and became law the following day. For the first time, the nation had an official policy toward the American merchant marine, as laid out in its preamble: That it is necessary for the national defense and for the proper growth of its foreign and domestic commerce that the United States shall have a merchant marine of the best equipped and most suitable types of vessels sufficient to carry the greater portion of its commerce and serve as a naval or military auxiliary in time of war or national emergency, ultimately to be owned and operated privately by citizens of the United States; and it is hereby declared to be the policy of the United States to do whatever may be necessary to develop and encourage the maintenance of such a merchant marine.9

A Century Later Opponents to the Jones Act have argued that this policy has not only been a hindrance to American maritime success, but the cause of its decline.10 Their attacks focus on the waning of the merchant marine from a position of dominance at the end of the WWII to its current position as 22nd in the world.11 With a total of 3,692 ships in the fleet (those over 100 gross tons), the vast majority are offshore supply vessels, tugs, and barges, and only 180 are larger than 1,000 gross tons. Groups such as the CATO Institute and the American Enterprise Institute focus on the greater expenses to operate the ships, to build and repair them in the US, and the unfair burden placed on citizens in remote areas of the nation, such as Alaska, Hawaii, and Puerto Rico. What they omit from their discussion are factors beyond the Jones Act. The introduction of open registries (or flags of convenience), the curtailing of coastal trade due to the construction of the Interstate Highway System and Colonial Pipeline, the end of differential subsidies in the 1980s, and the shift in naval construction out of public shipyards to private ones to build the 600-ship Navy, all contributed to the decline of the US merchant marine.